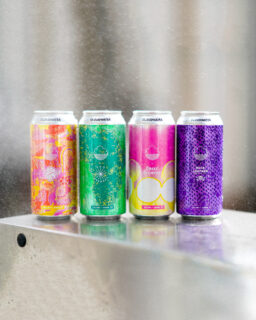 The Cloudwater and Friends four-pack will feature on the shelves of 470 Tesco stores across the country from Monday (April 19th) and includes beers created by Cloudwater in collaboration with Eko Brewery, Good Karma Beer Co, Queer Brewing and Rock Leopard Brewing Co.

Eko and Rock Leopard are believed to be the only breweries in the UK that are Black-owned and -operated, while Queer Brewing was established to provide visibility for LGBTQ+ people in and around the beer industry. Good Karma is an alcohol-free beer brand with Indian roots that champions mindful drinking and puts social responsibility at its core.

Cloudwater will not be taking any of the proceeds from the new pack, with all the profit instead being split among the four collaboration breweries, giving them an opportunity to invest in growth.

“The idea of the Beer With Big Ideas pack is to provide a genuinely transformative opportunity to four businesses owned by people who are underrepresented within the beer industry and wider society, with a view to changing their lives and the beer scene for the better,” said Cloudwater founder and managing director Paul Jones. “Our industry has long talked about the importance of diversity and inclusivity but, if we’re being honest with ourselves, progress has been slow and there is so much more we can do to engage with our responsibilities to face new communities. It is difficult to overstate the importance of products that so actively platform people who are underrepresented in both our industry and within business leadership positions across society appearing on the shelves of a major supermarket.

“None of the brands featured in this pack currently have a bricks-and-mortar presence, but our hope is that the profits from its sale will put them in a position where they can invest in retail spaces and brewing facilities designed to bring new skills, jobs, and products to their communities. Their success can act as a real inspiration for the rest of the craft beer industry and beyond.”

Another element that makes the pack unique is the inclusion of an alcohol-free offering alongside three regular beers. It’s a first for supermarket shelves and taps into soaring demand for low and no alcohol beers, encouraging a more mindful approach to drinking.

The four beers in the pack, which will retail at £10, are as follows:

Launching alongside the Beer With Big Ideas pack are four Cloudwater beers brewed exclusively for Tesco, as follows:

All of the beers have been brewed on Cloudwater’s behalf by BrewDog at their Ellon facility, using Cloudwater’s own recipes and house yeast. BrewDog will also not be receiving any profit from the sale of the Beer With Big Ideas pack.

Jones added: “By brewing these beers at BrewDog, we have created a unique opportunity that would have been impossible for us to facilitate on our own – our brewery is already maxed out servicing the independent trade. We have previously rejected a number of opportunities to sell our beer in supermarkets because none of them were right, for us, for our customers and for the industry. But we could not turn down the chance to effect wide-reaching, positive change and, by brewing these beers at BrewDog, we can take this step without altering production at our Manchester brewery or affecting supply to our existing customers.”

Founded in 2014, Cloudwater brewed their first beers on February 14th, 2015, in their Manchester brewery. Producing modern takes on classic styles, as well as paying their respects to heritage recipes and the beers that inspired them on their beer journey, they are devoted to creating bold, precise flavours with bottomless drinkability and focused consistency, one beer to the next. Independently owned and directed by co-founder Paul Jones, they are also committed to running an ethically conscious, human-centred business, with values they hope will be the standard throughout the industry.

For media enquiries, contact Connor Murphy on 07824557927 or connor.murphy@cloudwaterbrew.co