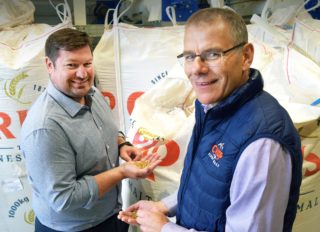 Mike Benson has become the latest in a line of technical experts to join Crisp Malt in the past few years. His experience as a brewer and quality controller sets him in good stead for his new role. As craft brewing sales manager for the North West, he will be offering technical support to customers looking for help.

“Selling is only part of the remit,” says Mike. “Nowadays, brewers are looking to their suppliers to do more than just supply goods. They are after any relevant expertise on offer.

“At Crisp, providing meaningful support to customers is a huge part of the focus – and that’s going to be right up my street. Whether it’s offering advice on recipe development, diving in to analyse and help solve problems or providing technical data and the newest scientific insights, it’s all an exciting challenge.”

Mike, who is a qualified engineer, started his career as a lab technician in Burtonwood at Thomas Hardy, which specialised in contract brewing and packaging.

Over a number of years, he gained his brewing qualifications and worked his way up to become brewing manager. Flavour-matching was a central part of his job, including when Molson Coors bought the business in 2015 – and a number of well-known brands were under the spotlight.

More recently, Mike was head brewer at the Love Lane Brewery in Liverpool, overseeing the installation of plant, the development of brewing operations and the creation of its now well-loved beers.

“There’s not much Mike doesn’t know about flavour development and flavour-matching”, says Crisp sales director Steve LePoidevin. “This – combined with his practical and scientific background – means he can offer really useful support to brewers.

“Many of our customers in the region may already know him from his time as chair of the Institute of Brewing & Distilling (northern section). Others will be meeting him soon.”

Other experts recently to join Crisp include chemical engineer Hannah Beer who has become the company’s technical development lead. She has been intricately involved with the new Speciality Malt Plant and the development of speciality malts.

In addition to her responsibilities on site, she has also been presenting to wider audiences including at British Guild of Beer Writer’s highly acclaimed Malt Seminar.