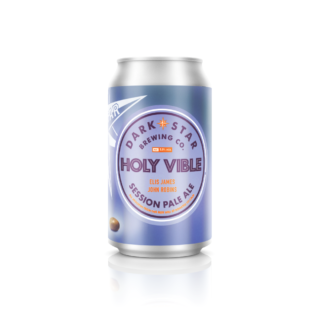 Sussex based brewer, Dark Star, has teamed-up with comedians and Radio X DJs Elis James and John Robins to create a beer to celebrate the launch of their new book, THE HOLY VIBLE: THE BOOK THE BIBLE COULD HAVE BEEN. All profits from the beer will be going to CALM: The Campaign Against Living Miserably, a charity Elis and John have long supported.

Commenting, John Robins said: “Ever since I tasted my first pint of Hophead I’ve been obsessed with Dark Star Brewing Co. After numerous visits to the brewery in Horsham I’m not only bedecked in their clothing but know them to be some of the most passionate creators and purveyors of beer in the country. Their mix of niche interests and broad appeal, their attention to detail and their ability to be traditional and yet #supercool made them my first and only choice to help me achieve a lifetime goal, that of having my very own beer!”

Robins added: “Elis and I have long championed the practice of ‘Keeping It Session’, limiting ourselves to beer at or below 4.5% abv. An extended discussion of this unlikely commercial digital indie radio campaign can be found in our new book THE HOLY VIBLE, which this beer celebrates. But the short version is you can drink more, chat longer, engage in less shame inducing behaviour and reduce both your hangover and the anti-social behaviour all too well documented by programmes such as UK Street Crime 2, Road Wars and Police Interceptors (which actually improve with every viewing).

Alongside our mission to reduce shame, drink longer and increase chats in lamplit nooks of pubs untold, we also want to do something to raise awareness and increase support for those suffering with mental health problems. Suicide is the biggest killer of men under 45 in this country. Men who perhaps felt unable to reach out, embarrassed to talk, or too alone to ask for help. It has to stop, and NOW. So we’ve partnered with the wonderful team at CALM: The Campaign Against Living Miserably. In their offices is a sign which reads ‘Being Silent Isn’t Being Strong’, and I couldn’t agree more! So that’s why I’m happy to shout from the rooftops to KEEP IT SESSION! SPEAK TO SOMEONE! READ OUR BOOK AND TRY OUR BEER!”

Simon Gunning, CEO of the Campaign Against Living Miserably (CALM), said: “We’re big fans of Elis and John and we were delighted when they approached us to work together. As the guys have repeatedly shown, humour can be a brilliant way to start a conversation and, with CALM’s helpline information on the cans of this lovely Session Pale Ale, there’s every chance that one of those conversations could turn out to be life-saving. In the interests of quality control I will be making sure I have several cans.”

James Cuthbertson from Dark Star added: “When John approached us with the idea it was really easy to agree to. He’s long since been a supporter of ours and when it was suggested that we brew the beer to support CALM, well that fitted in perfectly with our ethos of using beer to do good, something that can be seen in the work our Foundation does each year.”

With THE HOLY VIBLE published on the 18th October in hardback, audiobook and ebook, the 3.5% Session Pale Ale will also be available nationwide from mid-October in both keg and can formats.

The beer will be available in selected pubs and retailers from mid-October, and can also be ordered through the Dark Star Brewing Co website: www.darkstarbrewing.co.uk

THE HOLY VIBLE is published by Trapeze on 18th October. Elis and John will also be on a major nationwide book tour throughout the autumn, with the beer on sale in selected venues. For all the dates visit: http://elisandjohn.com

And for more info on CALM and the great work they do, head tohttps://www.thecalmzone.net/