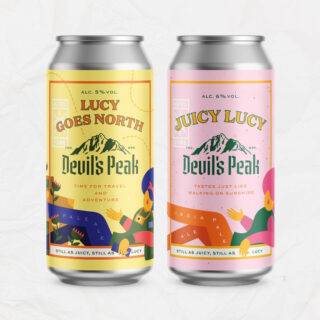 The South African brewery will be releasing two new beers for the UK market on Friday 17th September 2021.

South African brewery Devil’s Peak has partnered with multi-award-winning brewery Fierce Beer in Scotland to bring their AfroFunk beers to the UK market for Autumn 2021. Named after the famous mountain in Cape Town (the base of which is where the brewery was founded back in 2012), Devil’s Peak has been at the forefront of craft beer in South Africa ever since, and is always well-received by beer fans across the globe.

The partnership with Fierce Beer has been reignited over discussions between the two breweries during the past year, with Devil’s Peak feeling that now is a great time to introduce UK craft beer fans to its AfroFunk range; accessible ‘beer with more flavour’, brewed in the UK to maximise freshness and uphold the quality the brewery takes great pride in.

Innovation is also at the heart of the Devil’s Peak brand. From the start of the craft beer revolution in South Africa, the brewery has led the charge in introducing bold, interesting styles into a market saturated with the status quo.

The first two new UK beer releases are Juicy Lucy (IPA), and Lucy Goes North (pale ale), both brewed at Fierce Beer in Aberdeen, and available in keg and 440ml cans. The launch for these beers will be on Friday 17th September in selected bars and bottle shops across the UK, as well as a limited edition ‘The Round The World Pack’ featuring beers from both breweries available to pre-order from the Fierce online shop.

Co-founder of Fierce Beer, Dave Grant says “It’s been great to be back in touch with our friends out in South Africa, and we can’t wait to release these new beers this month, as we think they’re a great addition to the beer scene over here.”

Tastes just like walking on sunshine. Juicy Lucy has developed a loyal following in South Africa since her first appearance back in 2017 and continues to fly off the shelf every time she is released in her limited batches. So, when it came time to consider the line-up of beers to introduce in the UK, Juicy Lucy made her way onto the list with unanimous approval. Hazy, low bitterness with an aroma bursting of tropical fruits.

Tasting Notes: An explosion of fruit and citrus. Rich and juicy on the palate with heaps of flavour and intensity.

Time for travel and adventure! Having been down south and in the tropics, Lucy Goes North decided to bring some of the favours she’s discovered around the globe to the North. Hazy like Juicy Lucy, this beer is a freshly squeezed glass of hazy deliciousness – stunningly easy to drink, it is no wonder this beer makes for a great companion, wherever your travels may lead. The ultimate travel companion to Juicy Lucy as we launch Devil’s Peak beer into the UK.

In 2012 Devil’s Peak saw that the time had come for a truly South African brewery that offers something truly different. Truly special. That respects age-old brewing wisdom. And embraces the changes in their evolving beer culture. At Devil’s Peak, they’re proud to have played a key role in changing the beer landscape over the last nine years. Raising the bar, raising expectations, and keeping it real. From Cape Town to Aberdeen, the new beers are now brewed for the UK market at Fierce Beer in Scotland.