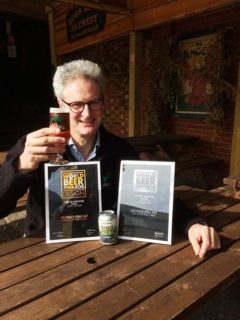 Hogs Back Brewery in Tongham is celebrating a double win at the World Beer Awards 2018. Its Outback Pale Ale picked up both a Gold Design Award and a Silver medal in the Golden Pale Ales category.

The World Beer Awards judge thousands of beers from all over the world to find the best in the internationally recognised beer styles. A panel of over 100 international beer experts tasted the beers in London earlier this year, while a separate team of design specialists assessed bottles and cans for their visual appeal. Outback was the only UK brand to win a Gold Design Award, and one of three Golden Pale Ales to win a Silver medal.

Rupert Thompson, managing director of Hogs Back Brewery, said: “We’re delighted that Outback Pale Ale has been recognised at this renowned international beer competition, especially as it is one of our newer beers, only launched in 2016.

“It’s great to receive accolades for both the beer’s taste and the can design – both are vital to a beer’s commercial success, as customers choose a brand first on its ‘shelf appeal’, then if they like the taste, they’ll buy it again.  It’s good to know we have managed to get both aspects right with Outback Pale Ale.”

The Outback cans show the iconic Hogs Back hog against a London skyline, in reference to the brewery’s location, as Thompson explains: “Although Surrey is hardly remote, on a clear day we can see as far as London from the brewery, so we feel we are brewing on the wilder side of the capital, in ‘London’s Outback’.”

Outback Pale Ale is available in cans from supermarkets and specialist drinks stores, and on draught in pubs and bars.  It is a 4.5% ABV golden ale with a light body and well-balanced, hoppy and citrus flavours, brewed from fine English malts and hops including Centennial, Cascade and, grown on Hogs Back’s own hop garden, Fuggles.