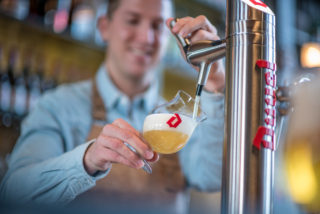 Duvel on Tap (8.5% abv), which uses the same ingredients, the same process of re-fermentation, and achieves the same carbonation as the iconic Duvel in bottle itself, will be available for the first time ever on draught in the UK.

Duvel is still seen as the reference among strong golden ales. Its bouquet is lively and tickles the nose with an element of citrus thanks to the use of the two hop varieties Saaz-Saaz and Styrian Golding. This is also reflected in the flavour, which is beautifully balanced with a hint of spiciness. The high CO2 content gives Duvel a wonderful roundness in the mouth and its iconic look – a rich foamy head with fine bubbles, served in its beautiful, tulip-shaped Duvel glass, specially designed to accentuate its aromas and carbonation. Duvel is both the perfect thirst quencher and the ideal aperitif.

Duvel Moortgat’s General Manager UK, John Wood, comments: “We are highly excited about the launch of the much-awaited Duvel on Tap here in the UK. With this gem, Duvel has re-affirmed its primacy in the beer world by becoming the only brewer producing beer which is re-fermented in a keg at such high CO2 content.

“Duvel’s re-fermentation, part of its famous 90-day brewing process, produced beer that was too highly carbonated to dispense on most standard draught dispense systems. Duvel has always needed a sturdy glass bottle strong enough to keep the re-fermentation process in check, hence why its stumpy brown glass bottle has become so iconic.

“What makes the Duvel on Tap dispense system innovative is that it uses a small single-use beer line that helps to slow the flow and pressure of the beer, recreating the traditional Duvel pour.”

Iconic Belgian golden ale Duvel has started pouring on draught in the UK at the following two establishments:

The full brewing process for both Duvel and Duvel on Tap takes 90 days and is renowned worldwide. After brewing, the beer spends two weeks in a warm room for re-fermentation and about six weeks in cold storage for conditioning. This extended maturation period contributes to Duvel’s refined flavour, pure taste and high carbonation level.

The Duvel Moortgat brewery was founded in 1871 when Jean-Leonard Moortgat and his wife founded the Moortgat farm-brewery. Around the turn of the 20th century, the Moortgat family brewery was one of over 3,000 breweries operating in Belgium at the time. In the early 1900s, Jean-Leonard’s two sons, Albert & Victor, joined the company and helped create the beer that later became the brewery’s namesake – Duvel.

With the fourth generation of Moortgats now at the helm, the brewery is still family-owned and family-run.

First brewed in the 1920s to commemorate the end of the First World War, Duvel was initially named “Victory Ale”. The First World War brought Belgium into contact with England – and English ales, in particular. Inspired by the success of English ales, Albert Moortgat, the founder’s son, decided to create a special beer based on the English model. After five years of experimentation – and an odyssey to Scotland to find a specific yeast strain – Victory Ale was born. (Duvel is still brewed with yeast cultured from the very same strain to this day.)

At a tasting session for local notables, the shoemaker, Mr. Van De Wouwer was so amazed by the beer’s potent aromas that he exclaimed, “This is a real devil” – or “Duvel” in Flemish. Since then, the name was changed from Victory Ale and the beer has henceforth been known as Duvel.

Convinced that a unique beer needed a unique glass, the third generation of Moortgats designed the first tulip-shaped beer glass just for Duvel. The innovative glass had to be able to hold the contents of an entire 33cl bottle. (Up until then, there had never been such a large beer glass!) The glass is specifically designed to offer a more complete experience of the beer: the rounded shape allows Duvel’s exquisite flavour and aroma to be fully experienced by the drinker and the way the glass narrows towards the top helps retain the beer’s carbonation, preserving the head.

Since 2007, the brewers at Duvel have been busy innovating with a third hop variety to give Duvel a surprising twist and some extra bitterness. Each spring, this resulted in the launch of a limited edition Duvel Tripel Hop, which complemented the rest of the Duvel range.

Duvel brewers did not simply add a third hop variety when creating the Tripel Hop, they also adopted a special process called ‘dry-hopping’: besides adding the usual hops during the cooking process, extra hop cones were added at a later stage in the brewing process (during the lagering stage). This resulted in intensified and refined hop aromas in the finished beer.

Six Tripel Hops later, in 2016, Duvel went in search of the ultimate Duvel Tripel Hop, which would be a stable in the Duvel range. More than 5,000 fans across Europe tasted and voted, and Citra was clearly the favourite. Duvel Tripel Hop Citra not only won a gold medal at the Brussels Beer Challenge, it was also awarded the consumer trophy at the Zythos Beer Festival.