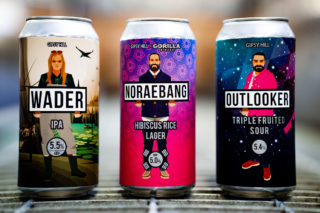 The releases are a mixture of new recipes and rebrews of popular previous specials, and also include the brewery’s first ever keg-only beer; a 9.9% Double IPA called Moneybags.

The new beers also include Outlooker, a new 5.4% triple fruited sour brewed with Blackberries, Raspberries and Lingonberries. Soured on the brewery’s house Lactobacillus strain, before being hit with 200g/l of fruit puree for a thick mouthfeel and out-of-this-world fruity flavours.

Last week Outlooker was awarded the overall Champion Award at the inaugural Love Beer London Awards, coming out on top in both the Flavoured Beer Category and Overall Champion Category. The competition, organised by the Society of Independent Brewers (SIBA), and the London Brewers Alliance (LBA) featured beers from over 100 breweries from London and the south east.

Also available this month is Noraebang, a hibiscus rice lager brewed with Gorilla Brewing Co from Busan, South Korea. The beer was brewed collaboratively when Gorilla’s Andy Green and Paul Edwards visited Gipsy Hill in December 2019, and was steeped in Hibiscus, the national flower of South Korea on both the hot and cold side of the brewing process.

Moneybags, the brewery’s third new release of the month, is a 9.9% Double IPA brewed with Citra and Simcoe hops. It’s fermented with a Kveik yeast strain at a higher temperature to accentuate the pineapple and mango hop aromas.

The full set of releases is as follows:

Speaking about February’s releases, Gipsy Hill Co-Founder Sam McMeekin said: “It was great to brew with the guys from Gorilla. After chatting with them on email it’s always fun to get together face to face and put plans into action. Equally, being able to use a brewery’s location as inspiration for a beer is a fun way to work with new ingredients”

“With our triple fruited sours, we push each time to go bigger and better than last time. Outlooker has more purée than ever and is just so fruity and sour. It’s kind of a new benchmark for us.”

The beers will be previewed at the Gipsy Hill Taproom’s Industry Night on 17th February, before going on sale on 19th February via the brewery’s online shop, and from 24th February to the on and off-trade. All the beers are available in 440ml can and 30L keg formats (with the exception of Moneybags – 20L kegs only)

Gipsy Hill Brewing Co was founded by Charlie Shaw and Sam McMeekin in 2014. Nestled at the base of Gipsy Hill, in South London, it is one of London’s largest independently-owned breweries.

In 2016 the brewery opened its first bar The Douglas Fir in Anerley, which it continues to operate alongside its on-site Taproom in Gipsy Hill. The Taproom, which re-opened after a successful crowdfunding campaign in 2018, was designed specifically with accessibility and inclusion in mind – a quarter of the bar is lowered, allowing wheelchair users to be served at an appropriate height.

In 2019, the brewery completed an ambitious brand refresh, increasing its number of permanently available beers to six, while also undertaking a refresh of its core brand values and visual identity.

As well as selling beer all across the UK, Gipsy Hill Brewing Co exports its products to 14  countries around the world, including Lithuania, Norway, Ireland, Denmark, Australia, Spain, France, Italy, Sweden, Switzerland, and The Netherlands.

Today, the brewery employs 40 people and is renowned for its commitment to beer quality, support for its community and exciting one-off special releases.

Label copy: Noraebang is a collaboration with the team from Gorilla Brewing Co. in South Korea. We’ve taken their national flower, Hibiscus, and put its pink hue, and sweet and sour flavours into a rice lager. We’ve sourced the best rice we can to make a clean, light flavoured lager that matches the beautiful delicate notes of the hibiscus so well. Goes well with spotlights and karaoke. Featuring Paul, Founder of Gorilla Brewing Co.

Label copy: Outlooker is a triple fruited sour, soured on our house lactobacillus culture, and charged with 200g/l of our favourite berry purées. It’s an out-of-this-world smoothie of a beer. Goes well with night skies and Northern Lights. Featuring Connor, warehouse mover and shaker.

Beer info: Moneybags is a Double IPA. It’s one of the most expensive beers we’ve ever made. A thick, big and juicy DIPA, pumped full of Citra and Simcoe, and fermented with a Kveik yeast strain to really bring out those big pineapple and mango flavours. Goes well with big bills and deep pockets.