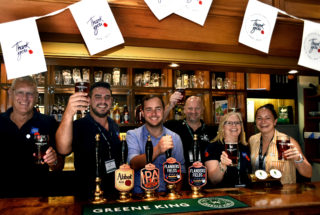 Greene King is pleased to announce its special edition beer, Flanders Fields, brewed to mark the centennial anniversary of the end of the First World War, has raised £32,961 for The Royal British Legion.

Flanders Fields, the official beer of The Royal British Legion’s campaign marking the centenary of the end of World War One, was brewed in collaboration with former servicemen and women. 20p from every pint sold was donated to the charity.

In celebration, Greene King gifted free beer to the servicemen and women on board Royal Navy ship HMS Argyll, who returned last week after a nine month deployment to the Gulf and the Far East. On their return journey to Plymouth they responded to a rescue signal from the Grande America cargo ship which was on fire. The Argyll’s crew saved the lives of 27 sailors before sailing home to their families

Matt Starbuck, managing director, Greene King Brewing & Brands said “We are proud of our servicemen and women, both former and current, who serve our country. Thank you to our many customers who enjoyed a pint of Flanders Fields, knowing by doing so they were supporting our military personnel through the important work of The Royal British Legion. We wish all those aboard the HMS Argyll a safe homecoming and raise a glass in thank you to them.”

Claire Rowcliffe, Director of Fundraising at the Royal British Legion, said: “We are very grateful to Greene King and to their customers for their generosity in commemorating the First World War generation. This special edition beer will raise much needed funds for today’s Armed Forces community, ensuring their service is never forgotten.”

About The Royal British Legion

The Royal British Legion’s work is encapsulated in its motto: Live On – to the memory of the fallen and the future of the living. The Legion is the nation’s biggest Armed Forces charity providing care and support to all members of the British Armed Forces past and present and their families. The Legion champions Remembrance and safeguards the Military Covenant between the nation and its Armed Forces. It is well known for the annual Poppy Appeal, and its emblem the red poppy. www.britishlegion.org.uk.  For further information on the Thank You movement visit britishlegion.org.uk/thankyou or #ThankYou100