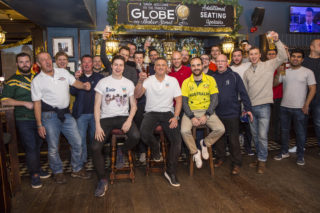 Greene King IPA, the Official Beer of England Cricket, has teamed up with cricketing legend Darren Gough to offer customers the chance to meet him and watch England this summer.

The former England fast bowler and talkSPORT broadcaster Darren Gough is calling out to cricket super fans to win a once in a lifetime opportunity to watch England take on Australia during the fifth test of the Ashes on Saturday 14th September. Starting the day with a breakfast at a Greene King pub hosted by Darren, the lucky winners and their guests will then be whisked across to the Kia Oval Cricket Ground alongside Darren to watch the England super stars in action.

Fans can win this unique prize through ‘Goughie’s Giveaway’, a Greene King IPA pub promotion, spearheaded by Darren across over 2500 pubs throughout the ICC Men’s Cricket World Cup and Ashes. Punters who buy a pint of Greene King IPA at participating pubs will be given a scratch card with the chance to win top prizes. There are twenty-one pairs of tickets for the exclusive VIP cricket experience with Darren and over 99,000 instant prizes to be won including free pints.

Speaking about the promotion Darren Gough said: “What a summer of cricket we have ahead of us. I can’t think of a better way to enjoy watching England in action than with a group of cricket fans and a few pints of Greene King IPA. Get yourself down to the pub to be in with a chance to win and I’ll see you later this summer.”

Matt Starbuck, managing director of Greene King Brewing and Brands added; “For England cricket fans the chance to meet one of England’s greatest ever players and spend a day watching our national team is a dream come true. We are proud to be the Official Beer of England cricket and to celebrate our national team by rewarding our loyal customers with this money can’t buy experience.”