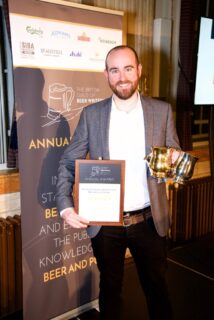 The search is on for the best writing, blogging and broadcasting about beer and pubs, as the Guild of Beer Writers opens its annual awards. Entries are open from now until the closing date of 30 September, with announcement of the winners set to take place in December.

All entries will be judged on how well they further the Guild’s mission “to extend public knowledge and appreciation of beer and pubs”.

Guild Chair Pete Brown said, “During these extraordinary times, we believe it’s more important than ever to recognise the work of our talented members, as part of our mission to improve standards of beer writing and extend the public knowledge of beer.

“This year’s awards are going to look different: social distancing means we can’t stage our popular awards dinner, so we’ll be announcing the winners via Zoom, and sadly we cannot guarantee cash prizes for winners, though we will be sending them a personalised trophy, and of course giving them as much love as we can on social and traditional media.

“We’re confident that our members will still want to have their work judged by our panel of experts. Reaching the shortlist, winning a category award or, for one entrant, being named as Beer Writer of the Year, marks those writers out as excelling in their field, and helps them in their career within beer and pub communications.”

The Guild will publish a shortlist for all categories in November, while the winner and runner up for each will be unveiled at virtual awards ceremony on Zoom, in December.  One category winner will go on to win the overall Beer Writer of the Year Award and the Guild also will also name its Brewer of the Year, sponsored by SIBA, based on votes cast by Guild members.

Full details of all categories, and advice on how to submit entries, can be found on the Guild’s website. Entries must be received by the closing date of 30 September and works submitted must have been published between 1 September 2019 and 31 August 2020.