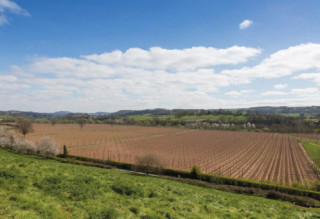 Good news has never been far away recently for independently owned Brook House Hops, a UK hop farm based in Herefordshire and launched to the brewing world in 2018.

After a successful first 18 months of trading and a positive annual hop walk just this August, they recently invested over £100,000 into new equipment and are now expanding three fold by increasing their acreage into neighbouring Worcestershire.

The owner of Britain’s largest area of hop farm ‘Newnham’, also independent, recently saw what Brook House were doing and called on the team to manage the farm which is just half an hour (15 miles) north of their existing land and HQ in Bromyard, Herefordshire.

The owner was considering turning the farmland from hops to asparagus as the English hop market is at times uncertain, due to the popularity of hop strains grown in America, New Zealand and parts of Europe.

Naturally and without question, wanting to preserve the ancient tradition of UK hop growing as much as possible, Brook House took the land under their wing and began to sell the British grown hops directly to brewers.

After this success – the hops were very popular indeed – the owner, being concerned that the skills required to grow hops were in danger of dying out, is now working with Brook House Hops instead of taking the big and expensive leap into vegetable crop farming.

The cooperative means that Brook House Hops now manage the land in Worcestershire and the owner of Newnham is actively involved in their business going forwards, through not only the use of the land but also with his valuable knowledge and input in decisions going forward. Supporting the farming of high quality British hops on his land is what he really wanted in the long term, so it’s a win win situation.

The great news is that by keeping Newnham as hop farmland, Brook House Hops are saving around 10% of English hops from disappearing. The late harvested varieties grown at Newnham are a good complement to the hops grown at Brook House Farm

With three sites now in the cooperative, Brook House Hops grow roughly an amazing 15% of all hops produced in the UK. And with UK hops rising in popularity across the world, this can only be a good thing for brewers and the industry – having an independent cooperative, offering the finest locally grown hops to put in their beers.

Yet the story does not end there. Adding 200 acres to their UK hop growing portfolio is just the beginning. In January 2020 Brook House intends to restore the early 1900s traditional farmhouse on site into compassionately designed offices and a showroom for customers, as well as invest in a large 1,000 square metre processing centre and cold store.

Once complete, this will be the first dedicated on-farm cold store for hops in the UK. It will enable Brook House Hops us to get all of their hops into cold storage less than 24 hours from picking, helping to preserve aromas for customers and further increase the quality of their (already) immensely high quality UK grown hops.

Owner Will Kirby is feeling very optimistic: “Farmer-owned hop growing cooperatives have worked very well in other countries like Yakima Chief in the USA, and HVG Germany. It is exciting to bring other farms into the Brook House umbrella.

Farm Manager Henry Smith, who actually grew up on Newnham Farm, is confident and enthusiastic about the move: “I’m really excited about replicating the attention to detail we have worked on at Brook House Farm on a larger scale in the Teme Valley. The valley floodplain has extremely fertile soil and we are looking forward to experimenting with the aromas we can get from the ground here. We are focussed on getting high-quality British hops into the hands of our customers – expansion to Newnham will allow us to serve more brewers with our prize-winning hops. Growing on two sites will also reduce any risk brewers take if they buy all of their hops from one producer. We can’t wait to get started.”

Finally, positive news for the locals is that because Brook House Hops are tripling in size, the team will be expanding greatly. There are openings for talented sales and operations people already, find out more e-mail sebastian@brookhousehops.com for more details.

Brook House Hops is a hop farm and producer based in Herefordshire, UK, established in 2018. They grow their own hops which are truly unique thanks to the rich unique UK terroir and Herefordshire soil. Brook House also sources niche hop strains from around the world and are meticulous about quality.

Brook House was established to give customers flexibility in their choices and access to the very best UK hops, without having to go via a traditionally inflexible hop merchant. As well as exotic hop offerings from around the globe, they grow some of the most aromatic, verdant hops in the world which they achieve by using a mixture of the latest technology and traditional farming expertise.

Find out more by visiting the website at https://brookhousehops.com or finding them on social media: