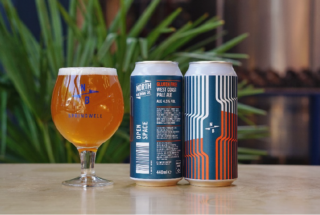 The beer will go on sale via their webshop [shop.northbrewing.com], family of independent bars and bottle shops, and via a selection of craft beer retailers across the UK. The beer will be pouring on tap at North Bar in Leeds, often referred to as the first craft beer bar in the UK, alongside the two North Brewing Co taprooms: Leeds City Tap on Sovereign Square and Springwell on Buslingthorpe Lane.

Open Space is a 4.5% West Coast Pale Ale, hopped with Simcoe and Chinook.

The brew team brewed the beer as usual, following their usual recipe development process, before adding Brewers’ Clarex enzyme to degrade the epitopes on the antigen which causes the immune response known as Coeliac disease. This means that the team have not compromised on depth of flavour in order to create a Gluten Free beer – they are incredibly proud of how Open Space is tasting.

A pale ale made with Best Ale, Cara and Light Munich malt to make a crisp and crunchy base with a deep golden hue. West Coast beers are always fun to make as it means we get to play with some of our favourite classic US hops. A steady dry hop of Simcoe and Chinook boasts sticky grapefruit, lemon, floral bouquets and pine flavours with a spiky pinch on the finish. The best part about this beer? – it’s gluten free!

What does West Coast mean?

Yeast originating from the West Coast of America has been used to ferment the beer. It has a low impact on the flavour and drops out of the beer easily to make a clearer beer. West Coast IPA and West Coast Pale tend to be more bitter, floral and resinous.

Open Space launches at an exciting time for North Brewing Co. April saw their seven existing venues re-opening for outdoor drinking with incredible sales. In addition to this the new taproom at Springwell has had a tremendous response. The past two weeks have seen the retail division of North Brewing Co show 42% growth compared to the same dates in pre-pandemic 2019.

They have since expanded the North Bar family of bars to seven venues in Leeds and the surrounding area: from Preston Bar nestled in leafy Oakwood to the cycling hub at North Bar Social in Otley and the scandi-inspired North Bar in Harrogate. In 2015 they turned their 10-year dream of making their own beer into a reality by opening a 15bbl brewery, North Brewing Co, just half a mile from their original flagship North Bar in Leeds. North Brewing Co undertook a period of significant expansion in 2020, moving to their new home, Springwell on Buslingthorpe Lane. Here they have opened a new 500 person capacity taproom and expanded their brewing capacity to 2.8 million pints a year.