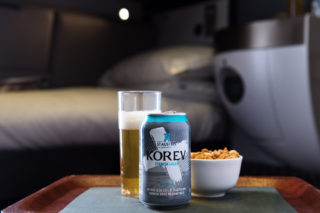 Korev, St Austell Brewery’s lager, has been selected by Great Western Railway (GWR) for the modernised Night Riviera Sleeper service between Penzance and London Paddington. Overnight customers can buy a 330ml can from the train’s recently refreshed lounge bar.

Jeremy Mitchell, Marketing and Communications Director, St Austell Brewery said: “Korev has proven itself to be a popular addition to our permanent beer portfolio since we first launched it eight years ago – it’s a premium quality, expertly brewed lager that has a strong Cornish provenance story.

“We’re delighted Korev lager has been selected by GWR for its train passengers – whether they’re travelling from London or enjoying a taste of Cornwall on the way back to the capital.”

Founded in 1851, St Austell Brewery is one of Cornwall’s oldest businesses. Still family owned and independent, the Cornish brewer also owns 179 pubs, inns and hotels across the south west of England. Its award-winning collection of beers are available in supermarkets and pubs nationwide.