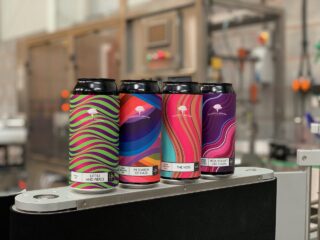 Quantock Brewery is releasing its first low ABV brew this week. Little & Fierce is the seventh beer to roll off the award-winning Somerset microbrewery’s canning line since it was installed three months ago.

Little & Fierce (3.2%) is a Small IPA. Piloted in the Quantock Brewery Tap Room last month it sold out in less than an hour. Its name comes from the low strength yet intense flavours the brew crew have created. The same yeast has been used as for New England IPAs to help craft a sessionable, modern low alcohol beer, with a cracking mix of Azacca, Cashmere, Citra and Idaho 7 hops to give big tropical and citrus flavours and aromas.

Cheryl Ford, Managing Director and Co-Founder of Quantock Brewery explains, “We’ve been working on Little & Fierce for a while. The overwhelmingly positive feedback from the pilot meant we knew we’d got it spot on. Making great beers that give pleasure is what we aspire to at Quantock Brewery. It is our mission to showcase beer in all its forms and help people discover new styles and re-invented old favourites. Investing in our own canning line means we are able to bring recipes to market more quickly. We’re so grateful to all our customers who are helping to keep the beer flowing by buying online, visiting our shop or coming along to our Tap Room in Bishop’s Lydeard. As the seasons shift and we look ahead to the end of 2020, we’ve got even more awesome beers in the in the pipeline for you to try.”

Other recent limited-edition cans include:

The Voss, 4%
This smooth pale ale is named after the region of villages in Norway where the newest strain of Quantock Brewery yeast Kveik originates from. Kveik, pronounced K-Vike, means yeast in Norwegian local dialect and is traditionally used in Norwegian farmhouse beers. The smooth pale ale base, a trio of heavy American hops to give notes of tropical fruit, citrus and pine, combined with the yeast that will kick out subtle funky and fruity esters.

Cheekily named because Head Brewer and Co-Founder, Rob Rainey isn’t a massive fan of sours, the brew crew team are hoping this recipe might change his mind. Loaded with Mosaic, a very heavy dose of raspberry puree and lactose, this Raspberry Berliner Smoothie is rounded off with a prominent but not overpowering sour finish.

Dark Abyss, 5%
This oatmeal stout is brewed with an abundance of malted oats, creamy and dark with a full bodied taste explosion of vanilla, liquorice and a hint of sherbet. Columbus and Waikato hops come together to create an awesome aroma at the finish.

In Search of Haze, 6.3%
This popular style New England IPA hits every note with tropical flavours, hoppy bitterness and a well-rounded, smooth finish.

To find out the latest news visit www.quantockbrewery.com

Quantock Brewery is a CAMRA and SIBA assured microbrewery. Founded in 2007, it was born out of the love of brewing by Head Brewer and Co-Founder Rob Rainey. Rob purchased his first home brew kit but when this didn’t produce the quality of beer he wanted, Rob, a former nuclear engineer, built his own kit from scratch. In 2015, Quantock Brewery moved to a larger facility in Bishops Lydeard, Somerset. The move enabled increased production, the opening of a brewery shop and in 2016 a taproom hosting regular events, live music, comedy nights and popular beer festival. The shop and Tap Room are open in line with Government guidance or beers can be ordered from the online shop.