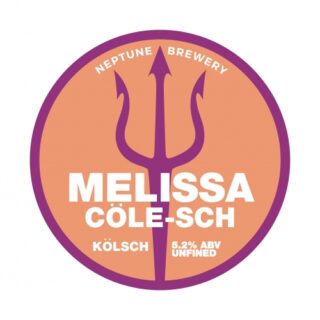 Liverpool-based Neptune Brewery is releasing its popular Melissa Cöle-sch beer in 440ml cans this month. Initially released in draught format back in February, the beer is a collaboration with award-winning beer & food writer, Melissa Cole.

Melissa Cöle-sch is a 5.2% Kölsch-style beer. Crisp and clean, expect notes of citrus fruit, a light, sweet biscuit malt, with a dry finish. Brewed using Saaz, Premiant, and Huell Melon hops, the name is a play on Melissa’s surname, to add a little fun to this collaboration.

Julie O’Grady, Co-owner of Neptune Brewery commented, “We had a great day brewing this beer with Melissa earlier in the year, and were blown away with how popular it has been. As the first release was draught-only, we were keen to make sure that we canned some of this next batch, to be able to support our independent bottle shops and customers across the UK.”

Neptune Brewery also launched its online store earlier this month, for customers across the UK who aren’t able to get its beers in their local area. A click & collect service is also available from the Neptune Taproom, with cans and draught beer continuing to be sold directly from the taproom during its Friday opening hours.

Founded in 2015 by Julie and Les O’Grady with friend Geoff Wainwright, Neptune Brewery is run on the principle of brewing quality, consistent beer, for all to enjoy.

Committed to working with the finest ingredients to produce world-class beers, from their core range to one-off collaborations, Neptune now produces 3000HL of beer per year and employs four people.

For further information, interviews, or to request samples for press purposes, please contact: