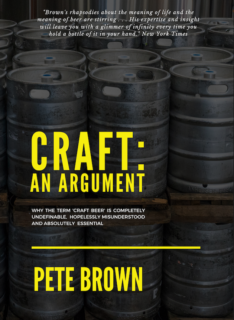 Craft: An Argument, a book conceived, written, edited and self-published in 13 weeks during lockdown, has won Best Beer Book at the prestigious North American Guild of Beer Writers awards, beating off competition from major publishers.

It’s not the first time author Pete Brown has won awards for his writing, having been published by Pan Macmillan, Penguin and Jacqui Small Publishing, but it was certainly the first time he’d published the whole thing himself.

“At the start of lockdown, all my work dried up and my wife (Liz Vater, Director of the Stoke Newington Literary Festival) had just cancelled her 10th festival, so we were staring down the barrel of months and months of no work and no prospect of work. Craft: An Argument had been a niche idea that I’d been developing for a while. I gave a presentation about it to South Africa’s Beer Boot Camp conference and it went down so well I realised it resonated much deeper than I’d thought with brewers and craft beer fans. I mentioned it to a couple of publisher friends but given the climate, they weren’t ready to take a punt on it. So we decided to do it ourselves.”

Liz takes up the story: “I know via the literary festival that self-publishing has come on leaps and bounds in the last 10 years and is no longer just the preserve of ‘vanity’ publishing. Some of the best writing in the UK is coming to market via small, indie publishers so we thought we’d give it a punt. We’re glad we did.”

Craft: An Argument (Why the term ‘craft beer’ is completely undefinable, hopelessly misunderstood and absolutely essential) deconstructs the issues people have with labelling beer ‘craft’ and explores them within the context of the modern craft movement, taking in Cartesian duality, the ever-changing nature of work, the evolution of language and the meaning of knowledge itself.

Reviews have been positive across the board:

“One of the leading beer thinkers of our time, Pete delivers up well-crafted, important insights into the nature of modern brewing. A must-read for brewers wanting to find their sense of place amongst the shifting sands of marketing, business consumers and trends.”

“In 2009’s Hops & Glory, Pete Brown took a cask to India in order to reveal the true nature of India Pale Ale. In 2020’s Craft: An Argument, he does the metaphorical equivalent to arrive at the meaning of craft as it pertains to beer. While the journey is certainly shorter, it is no less rigorous, compelling or splendidly entertaining”

“With Craft: An Argument, not only does Brown reaffirm himself as one of the greatest beer writers of our time, he offers beer professionals and enthusiasts the most insightful statement of meaning for the ‘completely undefinable, hopelessly misunderstood and absolutely essential’ craft beer.”

For more information about the book, please click here: https://tinyurl.com/y2gku8df