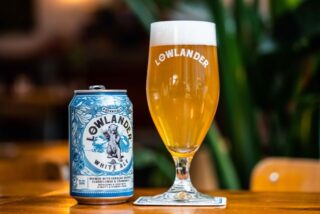 Netherlands botanical brewery, Lowlander Beer, is delighted to announce its expansion into Sweden with a nationwide listing at the government owned chain of liquor stores, Systembolaget and a distribution agreement with Solera Beverage Group, in partnership with Multibev AB. Established in 2011, Solera Sweden is a premium beverage group, specialising in the import, marketing, sales and distribution of wine, spirits, beer and other alcoholic beverages. With its experienced and knowledgeable team, Solera is ideally placed to help Lowlander gain a foothold in this key market.

Solera will be launching Lowlander White Ale cans at Systembolaget, following a rigorous blind taste testing with hundreds of participant entries. As part of its strategic plan and with the assistance of Solera Beverage, Lowlander Beer has future ambitions to expand into the bar and restaurant scene across Sweden with its full range of Lowlander Botanical Beers.

Chief Botanical Officer and Lowlander Founder, Frederik Kampman says, “We’re delighted to be introducing our range of naturally delicious beers to Sweden. Unusually Lowlander beer is botanically brewed, using similar herbs and spices to those used to make genever and gin.  We believe the time is right to bring our refreshing beers to the Swedish audience, familiar with botanicals, as well as to lovers of top-quality beer.”

Lowlander Beer is an award-winning brewery from The Netherlands – literally the Lowlands. Each of its botanically brewed beers has a unique story and a unique flavour. Lowlander’s ‘Chief Botanical Officer’, Frederik Kampman, worked for years in breweries and gin and genever distilleries in both The Netherlands and internationally. ‘As soon as I got into the world of distilling, I was gripped by the number of herbs and spices used. As a beer lover, I started to wonder what these botanicals could add to beer.’ And so, the idea for Lowlander Beer was born: unique, naturally delicious beers brewed with botanicals. Lowlander does not only use herbs and spices but also (re-)uses discarded botanicals such as Christmas tree needles for their Winter I.P.A. and reclaimed citrus peels from bars and restaurants for their 0.00% Wit beer.

Since it was founded in 2016, Lowlander Beer has garnered acclaim from both industry insiders, discerning consumers and media, with listings in over 3,500 accounts across the globe, including key cities such as Berlin, Paris and Hong Kong. Other countries include Russia and Curacao. Their ‘Tree to Table’ campaign, using recycled Christmas trees to brew their 2019 Winter I.P.A., had a global reach of 68 million people. Lowlander Botanical Beers has won over 35 medals including Best I.P.A. of The Netherlands and World’s Best Label at the 2019 World Beer Awards; a Certificate of Excellence for their White Ale at the 2019 Brussels Beer Challenge and a 2 star rating at the 2019 Great Taste Awards.

Lowlander has launched a new range of cans which includes their best-selling beers – Lowlander IPA, White Ale, Ginger & Kaffir Lime and Yuzu & Grapefruit.  The move to making Lowlander available in cans was inspired by their environmentally friendly properties; reducing weight for transport and shipping, easy recyclability and keeping Lowlander fresher for longer in airtight conditions.

For more information, a fact sheet about Lowlander or hi-res images, please contact: