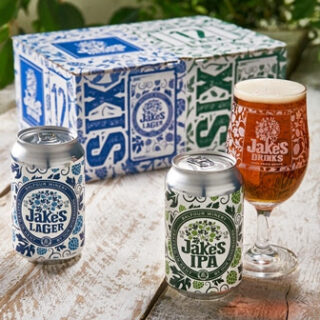 Kent-based craft beer and cider brand Jake’s Drinks has secured a nationwide listing with Majestic which promises to fast-track its growth ambitions. From April, all 200+ stores will stock a newly-created mixed pack containing six 330ml cans each of Jake’s Lager and Jake’s IPA.

The listing delivers the first nationwide platform for the beers, which were launched in spring 2021 by Balfour Winery. Created by Balfour’s winemakers in partnership with Kent craft brewers Cellar Head Brewing Co, Jake’s IPA and Lager are traditional beers with a winemaker’s touch, combining established, revived and new hop varieties to add a modern twist.

The Jake’s Drinks 12-pack will retail at £18 in Majestic. Created especially for the retailer, the pack reflects the distinct design used on individual cans, with an illustration of hop cones and bines that reinforces the beer’s provenance. Texturised labels for the 330ml cans enhance the beers’ premium image.

Jake Balfour-Lynn, founder of Jake’s Drinks, said: “We are delighted to see our beers going into such a prestigious national retailer and are confident it will bring a step change in the development of Jake’s Drinks.

“As a premium beer brand with a strong winemaking heritage, Majestic is the perfect platform for us, in terms of both their store locations and their customer profile, which is mainly wine drinkers who are seeking out quality, craft drinks with genuine provenance.”

John Storm, Director of Buying at Majestic said: “We’re always on the look out for beers which have a true sense of place, that taste amazing and excite our customers. Jake’s Drinks is linked to Balfour’s wines, which you will also find on our shelves, and this sets it apart from other brands.

“The combination of that provenance with the impactful new case makes it a fantastic fit for Majestic. We’re looking forward to seeing customer response when it goes in-store.”

Balfour-Lynn added: “Securing a listing with a retailer of Majestic’s stature is a great opportunity for us to take Jake’s Drinks to the next level in terms of national distribution and profile. This is an exciting time at Balfour Winery and at Cellar Head.”