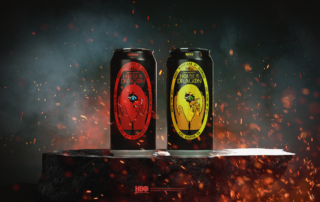 Mikkeller, the Danish brewery and Warner Bros. Consumer Products launch, today, two exclusive beers, Syrax and Caraxes, in celebration of “Day of the Dragon”,  the first day House of the Dragon product and merchandise are released in anticipation of the new prequel series coming to HBO and HBO Max on August 21, 2022.   The beers are the first in a new line from Mikkeller that marks the long-awaited series. These first editions, which are based on Styrian Dragon hops and dragon fruit, respectively, celebrate the story of the Targaryens and their dragons who ruled Westeros – 200 years before Daenerys Targaryen made it her mission to take back the Iron Throne.

“The Targaryens ruled with fire and blood. ‘Fire’ is a reference to the legendary dragons they rode, so it made sense for us to find inspiration for the ingredients in these majestic and terrifying beasts that conquered the Seven Kingdoms.,” says Mikkel Bjergsø, founder and creative director of Mikkeller.

Based on this, Mikkeller’s team decided to make two distinct beers; one that utilizes Styrian Dragon hops and one that’s infused with Dragon fruit.

Syrax (Session IPA, 3.5% vol.) For this light, bright, and high-flying session IPA, Mikkeller has used Styrian Dragon hops. This imparts some earthy, spicy notes and particularly a grapefruit-like citrus balance atop a light foundation from the low ABV. Ideal to drink while soaking up the sun!

Caraxes (Non Alc dragon fruit Ale, 0.3% vol.) For this wonderful alcohol-free beer, Mikkeller took its fresh, cider-like base beer Limbo, and added fresh dragon fruit. The delicate foundation is topped off with notes of pear and kiwi from the dragon fruit, leading to an exotic, thirst-quenching beer.

The two new House of the Dragon-inspired beers launches June 22 in several European markets, including Italy, France, UK, Germany, Sweden, Denmark, Norway, the Netherlands, among others. They are also available through Mikkeller’s webshop: www.shop.mikkeller.dk

Merchandise such as t-shirts, table tents, and coasters will also be available via www.shop.mikkeller.dk/ and in selected premium grocery channels.

Mikkeller is the adventurous story of a beer-loving Danish math- and physics teacher, who started experimenting with hops, malt, and yeast in his small kitchen in Copenhagen. Today he exports his craft beer to 50 countries, with just as many Mikkeller locations around the Globe. His inventive and constant development of Mikkeller has resulted in a brewery internationally acclaimed for innovation and quality. A Key element of Mikkeller’s brand is collaboration. From world-renowned Michelin restaurants and other amazing breweries to design brands, wineries, artists, and rock stars, we pride ourselves in working with the best of the best. Previous collaborations include David Lynch, B&O, The Danish Refugee Council, The National, Rick Astley, Scandinavian Airlines, Mastodon, Uerige, Gaffel, Noma, El Cellar de can Roca, Weingut Meierer, Burger King, and many more.

Warner Bros. Consumer Products (WBCP), part of Warner Bros. Discovery Global Brands and Experiences, extends the company’s powerful portfolio of entertainment brands and franchises into the lives of fans around the world. WBCP partners with best-in-class licensees globally on an award-winning range of toys, fashion, home décor, and publishing inspired by Warner Bros.’ biggest franchises from DC, Wizarding World, Looney Tunes, Hanna-Barbera, Game of Thrones, Cartoon Network, and Adult Swim. With innovative global licensing and merchandising programs, retail initiatives, and promotional partnerships, WBCP is one of the leading licensing and retail merchandising organizations in the world.

ABOUT HOUSE OF THE DRAGON

HOUSE OF THE DRAGON and all related characters and elements © and ™ Home Box Office, Inc. (s22)