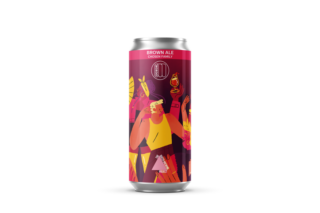 Mondo Brewing, the progressive South London brewery, has teamed up with The Queer Brewing Project, founded by Lily Waite, to brew Chosen Family, a seasonal American Brown Ale  (5.2%) as part of their Progress Beer Series. Lily is one of the UK beer scene’s most prominent advocates for queer and trans representation. The beer is being brewed on Thursday 22nd October  and will be released mid-November with proceeds going towards MindOut, the LGBTQ mental health service. mindout.org.uk

Lily comments: “This collaboration with Mondo is the first Queer Brewing collaboration in a short while, and what a collab to come back to! I’m always keen to brew with a seasonal focus, so brewing a brown ale for the autumn is a dream! This beer is everything I want to be drinking as the nights draw in—cosy toffee and dried fruit notes overlaid with a delicious, but subtle bitterness—and I’m particular excited about its impact too.

MindOut is a charity Queer Brewing has supported in the past, and with all of the pressures of the pandemic, I’m pleased to be supporting their vital work in bettering mental health amongst the LGBTQ+ community. I was also pleased to see the Work in Progress project launch this summer, as its mission is one aligned with that of The Queer Brewing Project, and I’m excited to have worked on the very first beer!”

The Progress series is inclusive for the creatives Mondo works with as well. Mondo has commissioned Brighton illustrator, Sam Prentice to design the artwork for the project. Sam has focused his work on queer representation, creating colourful and relatable characters who challenge the modern idea of what it means to be queer. In the run up to release, limited edition t-shirts will be available on Print Social, with 100% of profits going to MindOut, and 10% of Print Social’s income from the campaign too. https://weareprintsocial.com/campaigns/chosen-family

Sam says: “Being involved with a project that is really moving the conversation forward and making the world of brewing a more accessible and welcoming place has been a joy! Creating a design that celebrates the community of queer culture was so fun, but the best part of being involved is being able to give back to the community via MindOut.”

Mondo is a member of Work in Progress, a network of breweries in the UK that aspire to a more inclusive and representative beer industry. They are committed to forging links with communities to increase opportunities and promote collaboration between brewers and underrepresented groups in society.

The collaboration with Lily fulfils Mondo’s commitment to their Work in Progress targets, with donations to relevant causes and provision of opportunities for creatives a major part of the series’ goals.

Mondo Brewing co-founder Todd Matteson says, “We’re hugely excited to team up with Lily Waite for the first brew in our Progress Series. We’re working to build a business, and help shape an industry, that’s reflective of the community we serve.”

Chosen Family follows in the footsteps of Mondo’s recent Black is Beautiful Imperial Stout, a global collaboration with Weathered Souls, proceeds of which were donated to The Black Curriculum.

The American Brown Ale  will be available to drink at Mondo tap, in select pubs and bars around London  as well as via Mondo’s web shop, where you can order direct to your door.

Press release from Cru Comms on behalf of Mondo Brewing