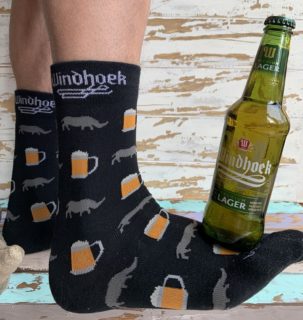 Namibian Rugby captain Renaldo Bothma, who currently plays for Harlequins, has teamed up with Windhoek Lager to raise money in aid of Save the Rhino International through the sale of limited-edition pairs of socks.

As part of the collaboration, Renaldo’s fashion company botthms has designed and produced 1,000 pairs of exclusive rhino and beer socks, which are now on sale for £8.99 on his website – www.botthms.com/rhinos/

50% of the profits from the sale of each pair of socks will be donated in aid of Windhoek Lager’s campaign to raise at least £5,000 for Save the Rhino. For details visit – https://uk.virginmoneygiving.com/RenaldoBothma

Renaldo Bothma commented:  “Like most Namibians, I have a huge respect for our country and wildlife and I’m passionate about ensuring we conserve it for future generations.  The rhino story is heart-wrenching so I’m delighted to be able to team up with the iconic beer of Namibia to raise awareness in the UK of the plight of rhinos and generate some money in aid of a fantastic charity.”

The Windhoek Lager campaign has already raised over £3,700 through a wide range of fundraising activities in the UK. This included a Windhoek team member running the Hackney Half marathon in full rhino suit, a charity Pig Racing night at the award-winning Pig & Whistle pub in Wandsworth and a series of charity live music nights at Brighton Rocks bar.

Three more Windhoek warriors will be completing charity runs in April and May but it is hoped all 1,000 pairs of the limited-edition socks can be sold, which alone would generate £3,000.

Windhoek Lager Export Manager Antonio Simoes said: “We can’t thank Renaldo enough for agreeing to support our fundraising campaign for Save the Rhino International.  He’s a hard-working, passionate, inspirational and no nonsense young man on and off the rugby pitch so it’s a privilege to have him on our side as we aim for a common goal – socking it to the poachers!”

For further information on Windhoek Lager’s campaign in aid of Save The Rhino International and this latest charity initiative visit:  http://uk.virginmoneygiving.com/fund/WindhoekBeerUK

About Renaldo Bothma and his company botthms

With 16 international rugby caps to his name, Renaldo Bothma is the current captain of Namibia.  Known for his confrontational style of play which saw him play for a host of South African provinces as well as in the last Rugby World Cup, Renaldo has been playing his club rugby for Harlequins in the Guinness Premiership since 2017.

Botthms was set up in December 2018 following Renaldo’s secondary love of fashion.  Creating a bespoke stylish range of funky socks, headwear and rings, the high quality products are available UK-wide via www.botthms.com.  Follow on Instagram, Twitter and Facebook @botthms

The story of Windhoek beer began with two German bankers arriving in the erstwhile German Colony of South West Africa in 1906. Hermann Ohlthaver and Carl List were completely unprepared for the searing sun and desolate landscape, yet they never returned to their country of origin. Instead, in 1920 they scraped together their life’s savings and bought four small local breweries, one more run-down than the next.

The Windhoek founders were passionate about beer; beer made the German way, made according to the Reinheitsgebot of 1516 and so Namibia’s 100% pure beer was born.  Today the production capacity of the Windhoek Brewery is upwards of 2.2 million hectolitres per annum. Beer from this site travels to the furthest corners of Africa and around the world.

Windhoek Lager’s distinctive, hoppy flavour and crisp taste can be attributed to its longer brewing time.  This 100% pure premium lager is brewed using malted barley, hops, water and nothing else.  Windhoek Lager has a 4% ABV.  Windhoek Lager has been consistently recognised by the DLG quality awards in Germany, our 2018 gold medal is our 12th Gold in a row.  Consistent brewing according to strict international standards means Windhoek Lager has earned the title – Africa’s World Class Beer.

About Save the Rhino International

Save the Rhino International collaborates with partners to protect endangered rhinos across Africa and Asia with the goal of ensuring all five species of rhino thrive in the wild. With the rhino’s habitat shrinking across the globe and poaching reaching crisis point, three of the five species of rhino are Critically Endangered and two of these species have fewer than 100 animals surviving.

Save the Rhino International is aiming to halt the twin threats to ensure by 2036, black rhinos, Sumatran rhinos and Javan rhinos will no longer be Critically Endangered. To halt these twin threats, the UK-based charity works with the most effective people and projects in Africa and Asia to support rhino populations, champion community-led conservation, reduce the trade in illegal horns, and inspire rhino supporters across the globe to join in.

For further information on the latest projects visit: