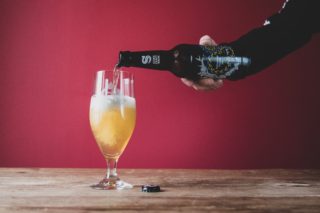 Tate’s bars are well known for their commitment to beer with the monthly Tap Takeovers and three years of brewery collaborations, brewing beers with creative breweries to celebrate gallery milestones or to mark exceptional exhibitions.

This spring, Tate has invited Berkshire based Siren Craft Brew to create a limited-edition milkshake IPA, in celebration of the highly anticipated The EY Exhibition: Van Gogh and Britain.

The Tate team brought their knowledge and worked closely with Siren to brew a beer that would deepen the visitor experience and provide a more immersive gallery experience. Responding to this, Siren has designed a bright and modern beer, the flavours of which reflect the innovation and creativity that Tate, Siren and Van Gogh are known for.

Andrew Downs, Operations Director at Tate Eats says “Beer can be done in a thousand ways, there’s so much room for creativity. Tate is about giving a platform to creative people and this is just another way of doing that.”

Thousand Things IPA was particularly inspired by Van Gogh’s famous painting, ‘Starry Night’ which is known for its bold colours and brushstrokes. The brew reflects the artist’s radical style by combining loud ingredients such as toasted coconut, passion fruit and mango to create a creamy, full-bodied beer full of juicy fruit flavour. The tropical hops like Citra, Simcoe,Mosaic and Chinook also contribute to this, while adding a delicate bitterness.

The beer gives visitors a taste of the exhibition through the incorporation of cypress wood which is a nod to the cypress trees that feature heavily throughout Van Gogh’s work. The cypress wood in the beer augments the fruit-led aromas and tempers the lactose sweetness. In ‘Starry Night’, there is a looming cypress tree that is said to represent Van Gogh himself.

The beer can be found in both Tate Modern and Tate Britain’s bars. Guests also have the chance to pair the beer with food at the Rex Whistler, which is serving an exciting tasting menu and a three-course lunch menu in homage to the Van Gogh exhibition. Head Chef Alfio Laudani has designed the menu, influenced by Van Gogh’s famously vivid colour schemes, and the Dutch flavours he favoured.

The menu features dishes such as sunflower seed crusted fillet of Halibut, white wine pickled herring and Gevulde Koek (a popular Dutch almond tart) for dessert. These dishes are available from now until the 11th August.

The pickled herring plate has been paired with Thousand Things IPA as the tropical hops and delicate bitterness of the beer enhance the salty flavour of the fish and cuts through the oiliness. The coconut, passion fruit and mango notes in the brew work harmoniously with the fennel and the cypress wood flavours blend with the black waffle.

Illustrator Ben Hasler designed the label for the beer taking ‘Starry Night’ and the punchy flavours of the milkshake IPA as inspiration for a modern interpretation of Van Gogh’s famous painting.

The name ‘Thousand Things’ is derived from a quote from a letter Van Gogh sent to his brother which describes the artistic process:

on the stage in a

to think of a

at the same time in a

For another chance to try the beer, Tate Modern will also be hosting Siren at a special Tap Takeover on the 25th July to showcase Thousand Things IPA and range of other delicious beers from Siren.

seek out the best beers in Britain. Sourcing the brews for the four Tate galleries, the team has

ensured that the list focuses on well-brewed, well-crafted beers, made with an ethos in line

with Tate. Visitors at Tate can enjoy beers from passionate and innovative breweries across the

SIREN CRAFT BREW Siren Craft Brew was born in 2013 with a simple idea in mind: to

introduce exciting, full-flavoured and forward-thinking beers to as many people as

possible. There are now six Sirens of Siren Craft Brew. These Sirens characterise their

flagship beers. They’re adventurous but drinkable, designed to be accessible to those lured

into craft beer, yet flavourful enough for those seasoned beer fans to return to time and