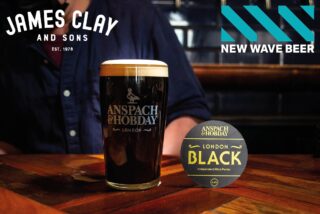 Independent London craft brewery Anspach & Hobday have announced their partnership with James Clay & Sons and New Wave Beer as their exclusive wholesale partner for their new nitro porter, London Black.
The partnership allows nationwide distribution for London Black, Anspach & Hobday’s independent, craft answer to mass produced macro-dark beer, ensuring a much needed increase in consumer choice for publicans and patrons across The UK.
Available exclusively in keg, James Clay & Sons are currently taking orders for London Black and distributing in England and Wales, with New Wave Beer supplying Scotland.
Taking inspiration from our flagship beer, The Porter, London Black is a creamy, smooth and sessionable London Porter – poured from keg but smooth like cask. An easy drinking dark beer, with an incredibly tight creamy head that lasts all the way down the glass, London Black is the true independent local alternative to mass produced macro-dark beer.
Anspach & Hobday, Chairman and Co-Founder – Jack Hobday says:
“Historically, exceptional Porters were made in London, where the water profile suits the style, and shipped all over the country and even the globe. London Black is our modern iteration and we couldn’t be more excited for this nitro-porter to be following in those steps and now available nationwide through James Clay in England and Wales and New Wave in Scotland.”
James Clay & Sons, Head of Sales – Matt Eyre says:
” James Clay & Sons prides itself on curating a range of quality beers and so we are excited to be bringing Anspach & Hobday’s London Black to market across the country. We’ve long had nothing but admiration for Anspach & Hobday’s exceptional talent for blending tradition with innovation and this nitro-porter provides a delicious point of difference to draught dark beers.”
ABOUT LONDON BLACK
London Black (4.4%) – Taking inspiration from our flagship beer, The Porter, we wanted to brew a truly sessionable London Porter. What better way to create an effortlessly drinkable dark beer than to make it nitro. The resulting creaminess and smooth mouthfeel balance perfectly with the subtle roasted notes of coffee and chocolate.
The beer brings together the rich history and heritage of London Porters, with the modern techniques of brewing nitro beers. The result is a beer that is easy drinking, without sacrificing its character.
ABOUT ANSPACH & HOBDAY

Founded by childhood friends Paul Anspach & Jack Hobday, Anspach & Hobday launched in Bermondsey in 2014. Anspach & Hobday believe beer is about enjoyment and community. In 2019 we set up our Croydon Brewery following on from our 2018 crowdfund (542 investors, £525,250 raised, £3m valuation).

Inspired by traditional styles and remade for the 21st century beer drinker, Anspach & Hobday is known for its diverse range of beers. Brewing everything from historic ales and porters to experimental sours and IPAs. All of our beers are vegan friendly and made using renewable energy.

Anspach & Hobday is best known for its flagship beer and award-winning beer, The Porter. The brewery epitomises London craft beer, bringing together tradition with modernity.

About James Clay and Sons