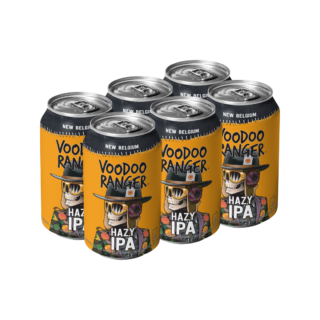 American craft beer brand, Voodoo Ranger, will be touching down on British soil for the first time with a UK exclusive Hazy IPA (5.3% ABV). Available for pre-sale from Friday 13th November, consumers will be able to get hold of this true Ranger style ‘bold and juicy’ IPA from Wednesday 25th November through its online shop.

As a pillar of the New Belgium portfolio, Voodoo Ranger has made its way across the Atlantic under the Lion Little World Beverages’ quartet that also covers British grown Fourpure Brewing Co. and Magic Rock Brewing along with Australian favourite, Little Creatures. The Hazy IPA will be brewed in Bermondsey, London at Fourpure’s brewery in 330ml cans, available for nationwide deliveries.

Kyle Bradshaw, New Belgium Director of Brand Marketing in the US, said: “Voodoo Ranger is a very different brand in the world of craft beer and drinkers appreciate that. It’s bold, anarchic and embraces the unconventional. The face of the brand is the Voodoo Ranger himself, a straight-talking and wryly humorous spokes-skeleton who pokes fun at some of the pretention around craft beer. The brand positioning offers a real point of difference, tapping into a millennial and Gen Z centric audience and we think Voodoo will translate to a British audience very well.”

Voodoo Ranger as grown more in value (+$31m) than any other national IPA brand family YTD[1], which is strongly linked to the way it connects with its drinkers. Its US Instagram channel represents a new way for breweries to interact with their audience through memes and topical humour coming from the voice of Voodoo Ranger himself. Having ten times the social engagement rate of the average craft beer brand and top social engagement rate in the entire US beer category, it’s something the UK team plan to replicate across the pond.

Adrian Mooney, marketing director at Lion Little World Beverages says: “While we have big Voodoo boots to fill in the UK, it’s great opportunity to inject some revelry back into UK craft beer. It’s time for Voodoo Ranger to rock the boat of what has become the ‘norm’ for craft beer and we plan to execute the same authentic positioning, through the line from marketing to on-shelf and in venue, that gave Voodoo Ranger its ‘cult like’ following in the US. Just like our American cousins, we want the brand to be a genuine player within the gaming sphere and see Voodoo Ranger collaborating with the community to make two worlds collide. We’ll continue the legacy of the Ranger, by delivering quality beer alongside tongue-in-cheek content that’s relevant and engaging to our audience and, of course, live a little Rangerously.”

Voodoo Ranger will be arriving in the UK for pre-order on Friday 13th November via voodooranger.co.uk, with online orders going out from the following Friday. Currently the brand’s on-trade launch is on hold until following the UK’s nationwide lockdown.

New Belgium Brewing is recognized as a leader in sustainability and social responsibility. Founded in 1991 in Fort Collins, Colorado, the company expanded to Asheville, North Carolina in 2016 and Denver, Colorado in 2018 and is now the 4th largest craft brewery in the U.S. Dedicated to proving that business can be a force for good, New Belgium is a Certified B Corp and was the first brewery to join 1% for the Planet. The brewery has donated over $26 million to charitable causes since 1991. New Belgium is famous for its flagship beer, Fat Tire Amber Ale, along with year-round favorites like Voodoo Ranger IPA, USDA certified organic The Purist Clean Lager, and La Folie Sour Brown Ale; as well as an award-winning wood-aged sour program and innovative limited release beers. To learn more about the full product lineup and New Belgium’s Human Powered Business model, visit NewBelgium.com

This UK-based arm of Lion’s Australian brewing business is spearheaded by Managing Director of Lion Little World Beverages Europe, Gordon Treanor. With more than 20 years’ experience in beer, most recently heading up Lion’s craft portfolio in Australia, Treanor brings a wealth of knowledge from the dynamic Antipodean market that he hopes to translate into the rapidly growing UK craft sector.

London’s Bermondsey-based Fourpure and Huddersfield-based Magic Rock lead the charge with both having seen strong growth in 2019, with national distribution through leading retailers and a strong portfolio of core and seasonal products. The pair have been at the forefront of the craft beer scene since 2011 and 2012 respectively.