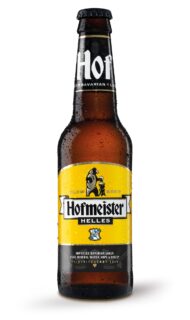 Former Greene King and Ei Group chiefs put money into revived authentic Bavarian Hofmeister brand and believe it has the potential to be the next big thing in world beers.

The new revamped Hofmeister that has been brought back to the beer market as a premium, slow brewed, Helles lager from the forests of Bavaria is on course to be one of the UK’s biggest world beer brands in the next five years. That’s the verdict of two new non-executive directors – Kim Francis and Euan Venters – who should know how to spot a winning beer brand having spent decades selling and promoting hundreds of beers during their times working for Scottish & Newcastle, Heineken, Greene King, Enterprise Inns and the Ei Group.

Venters said he was particularly attracted to Hofmeister as he has spent a career helping “rejuvenate old, iconic brands” including Durex, Radox and Vaseline during his earlier career, as well as beer brands such as Fosters, Holsten Pils, Greene King IPA, Old Speckled Hen and Belhaven Best.

They are both united in their praise and excitement for the new look and fresh tasting Hofmeister and in particular the talent and back story of the two British drinks entrepreneurs, Spencer Chambers and Richard Longhurst, who relaunched the brand in 2017.

It was they who had the vision to buy the brand off Heineken, Hofmeister’s last owners, before it was withdrawn in 2004 and to relaunch it by taking it back to its supposed Bavarian roots, finding a local, traditional brewer capable of making a beer they could be proud of.

At the height of its fame and sales in the 1980s and 1990s, when Hofmeister was the fourth biggest beer brand in the UK, its advertising was based around ‘George The Bear’ who, it was claimed, had come from the forests of Bavaria. In reality the beer was made in the UK as a high volume, low abv mainstream lager.

The new Hofmeister is a premium 5% Helles lager made in keeping with the German Reinheitsgebot beer purity brewing law that dates back to 1516 and means it can only use three local ingredients (mineral water, barley and hops).

It has since picked up a stack of awards, including being named Best Lager in the World (IWSC) and double gold at the European Beer Challenge.

Next month it will be introducing two new brands to its portfolio: Hofmeister Weisse, a traditional Bavarian wheat beer at 5.1% abv; and Hofmeister Ultra Low, a 0.5% abv Bavarian Helles lager made with the same local mineral water, barley and Hallertau hops.

The new revamped range means it is ready to push on and really make its home in the best premium outlets in the country, according to Francis and Venters.

They have not just invested in the brand, but will be taking an active role in helping to develop it, with Venters focused on building Hofmeister’s brand credentials, whilst Francis lends his expertise to how it targets and grows its distribution.

Whilst Francis and Venters both remember the brand fondly from its heyday – Francis even listed and sold it in his days at Courage – they have invested because of its potential and exciting future.

Francis said he was intrigued by the new look Hofmeister when he came across it at a trade show last year. “I first tasted the beer and thought it was amazing. Then I talked to Richard and Spencer about their plans for the brand and could see what an enormous opportunity this was.

“They have a beer, a brand and a plan that can make Hofmeister the most compelling beer brand in the market.”

Venters said: “Richard and Spencer have done a fabulous job taking it to where it is. It’s now a case of evolving its brand positioning and distribution.

“Hofmeister already has such strong brand awareness and affection, which usually costs millions to get, and we now have the authenticity as well. We think it will be a huge success.”

They believe its quality and premium credentials make it an ideal brand for each trade channel it is sold in to because it offers operators consistent high margins with no reason to discount.

The key now is to grow a distribution strategy, building on London and the South East. It will aim to position Hofmeister in the top specialist retail and on-trade outlets with a target of being in 1,200 to 1,400 of the top bars, restaurants and hotels over the next four years, with sales of around £10 million. As part of this strategy it believes it can also attract more of the multiple and national players to list it.

Hofmeister is building a strong track record of outperforming other premium beer brands on tap at a higher retail price and bigger margin when it goes into a new outlet. All this is backed with a premium point of sale offer and a Hofmeister branded glassware range that Francis said is one of the best he has ever seen – thanks to Longhurst and Chambers’ long experience in drinks gifting.

“People drink with their eyes and how good the beer looks in the glass. Get that right and you can offer them the best drinking experience,” said Francis.

Venters believes the world beer market is wide open for a quality German beer, and they don’t get any better than the Helles lagers made in Bavaria. “The product is fabulous, it looks good and you have this brilliant entrepreneurs’ story. That’s why we believe in it,” he said.

Hofmeister Helles is produced by a fourth generation Bavarian brewery, Schweiger, one of only four out of 600 Bavarian breweries to be Slow-Brew accredited – a technique that helps to give the beer its fresh, crisp taste and 5% abv. It uses water from its own underground lake in the Ebersberger Forest in the heart of the region and hops from the prestigious Hallertau area.

Francis and Venters could not be happier to be back doing what they do best, promoting and selling beer.

“I have a smile on my face every time we have a meeting,” said Francis. “There are a 100 reasons why Spencer and Richard should not have done what they did in bringing Hofmeister back. But now they have, I am absolutely delighted to be part of a team with a brand from the best beer region in the world and is 100% British owned.”

Venters added: “I feel lucky and privileged to be part of such a positive entrepreneurial story. This is a very clever iconic brand, whose product is sourced from a brilliant Bavarian brewery, with British ingenuity bringing it all together. We can each add something and we’re having such great fun working together.”

For a selection of imagery to accompany this release, please click here.

Hofmeister Brewing Company was relaunched in 2017 by co-founders and friends, Richard Longhurst and Spencer Chambers. Now British owned and proudly independent, its signature beer, Hofmeister Helles, is an authentic imported Bavarian lager that’s slow brewed and cold fermented in the heart of Bavaria.

Hofmeister Helles is made according to the ancient Reinheitsgebot German beer purity law by a 4th generation family brewery who are one of only four certified slow brewers in this historical brewing region. Using only three local ingredients; pure mineral water, locally grown barley and Hallertau Hops, Hofmeister beer is laagered slower at zero degrees for a fresh, crisp, Helles lager with an ABV of 5%.

Hofmeister Helles is internationally awarded and the current holder of IWSC World’s Best Lager and double gold at the European Beer Challenge. Ingredients, process, and integrity has helped to foster a rapidly growing presence across independent high-end pubs, bars, hotels and restaurants who demand a premium lager offering, including Harrods and the Connaught Hotel.

For further information or to request samples: