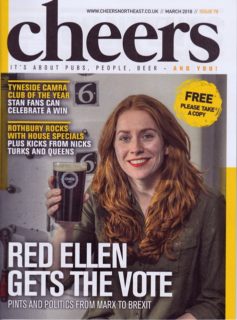 The March issue of Cheers magazine, produced by Guild member Alastair Gilmour, is now available to read online at: http://www.cheersnortheast.co.uk/cheers-78/

The magazine is packed with pub stuff, taking a look at beer and politics, a Camra award-winning football and social club where Arsenal’s Pierre-Emerick Aubamayong played his first match in Britain, plus a focus on an attractive Northumberland town – and breweries, micropubs and the most awful jokes imaginable.