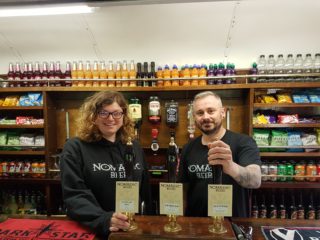 Venue: the brewery at Unit 11 Sheepscar House, 15 Sheepscar Street, Leeds, LS7 1AD. The Brewery is next door to Enterprise vehicle rentals, a 15-minute walk from Leeds City Centre and just 3 minutes away from nearby North Brewing Co’s brewery tap room – Here is a map!

Brewing since 2017, ‘Gaffa’ Katie Marriott and ‘Head Brewer’ Ross Nicholson are the team behind Nomadic Beers.

“It’s great to be two years old!” says Katie “it’s been a successful two years too; in August last year we got the keys to our new, bigger home. Then, just before Christmas, we had our brand-new brew kit delivered”.

In fact, the 2nd Birthday party will be the first chance for people to see the new brewing vessels; an 8 BBL kit that can produce 32 casks of beer per brew, double what Nomadic Beers produces now.

So, what else can guests to the Birthday party expect? “Nomadic will be pouring the beers” adds Katie. “We’ve also just installed some additional hand pulls on the bar, so we’ll have more choice on there than previous events we’ve had in our brewery”

“There will also be a range of gin from local Leeds Gin and free soft drinks.”

“If you follow us on social media, you’ll have seen some great murals that Christine Jopling has been doing for us. On Saturday, we’ll be unveiling the final part of this and it’s really special. I hope everyone loves it as much as we do.”

As well as the brew kit, drinks and the mural unveiling, there will be food provided by ‘Chef’ Tony Coltman from Flat-Oeuf Crepes, including vegetarian and vegan options. Plus, dog biscuits for people bringing their four-legged friends.

The party is part of this year’s Tryanuary campaign and also supports the ‘Everyone Welcome Initiative’.