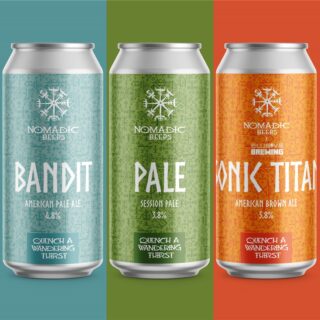 Nomadic Beers is delighted to announce the release of beer into cans for the first time, and to introduce a fresh new look, all happening in March.

Beers ‘Pale’, a 3.8% ABV session pale, ‘Bandit’ a 4.8% ABV American pale ale and ‘Sonic Titan’ a 5.8% ABV hoppy American brown ale will all be available in can, with each design showing off Nomadic Beers’ rebrand. Replacing the traditional light brown will be a brand new, bright, colourful look.

“I’m really excited to be releasing our beer into cans for the first time” said Katie Marriott, owner of Nomadic Beers. “After all the difficulties with the pandemic, the new cans and the rebrand has been something positive to look forward to”

The new can range is available to order now to those people who are part of Nomadic Beers’ Membership Club, ‘GeeGees Gang’. Everyone else will then be able to order from 8th March, via the web shop at www.nomadicbeers.co.uk/shop with home delivery and click and collect available.

Nomadic Beers will be hosting a special online party for the can launch and rebrand via Zoom on Saturday 13th March from 6pm. Joining details are available at www.nomadicbeers.co.uk/taproom.

Established in 2016, Nomadic Beers is a small brewery based just outside of Leeds City Centre. It is Gaffa Katie, Head Brewer Ross, Harriet and Mike who do everything between them! From brewing, packaging & delivering the beer, to all the office work needed to keep the business running smoothly.

The brewery has a 13 hectolitre (8BBL) brew plant & they are passionate about making hand-crafted, quality beers, with a focus on cask ale. Whilst other breweries can make beer simply at the push of a button, the Nomadic team are involved hands-on throughout the entire process. It means their beers are made with a lot of love & hard work. As a result, they receive great feedback from consumers & trade alike.

Why are they called Nomadic? Brewery founders Katie and Ross have both lived in various places across the UK and, although both have settled in Leeds now, the name reflects the brewery’s wandering beer styles!