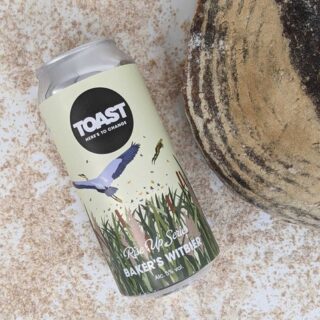 ●  The collab is part of Toast’s Rise Up campaign with fellow B Corps, highlighting the environmental impact of our food system to galvanise action ahead of COP26.

●  The Baker’s Witbier, brewed with organic ingredients, is raising awareness about the impact of industrial agriculture on our rivers and coastal ecosystems.

Craft brewery Toast Ale has released the third beer of its Rise Up series, raising awareness of our broken food system and galvanising action to fix it for people and the planet.

Released on National Toast Day (25 February) during Real Bread Week, Baker’s Witbier is a 5% Belgian-style spiced wheat beer with subtle notes of orange and coriander. As is Toast’s signature style, the beer was brewed with surplus fresh bread to prevent food waste and reduce the environmental footprint of the beer.

And the beer’s label carries an important message about our river systems:

“Industrial food production is polluting our rivers, which create coastal dead zones as they enter the ocean. But one-third of food is wasted. By reducing food waste, and supporting farming practices that use less chemical fertilisers, we can protect freshwater sources.”

Beer lovers can do their bit by enjoying a cheeky pint. All profits will go to the environmental charity Feedback  t o support campaigning work on food systems ahead of COP26.

Toast’s Rise Up campaign i s also encouraging drinkers to ask their MPs to be advocates for climate and nature, and ensure the food system is taken into account in environmental policy (there’s an easy-to-use form at toastale.com/riseup).

Food production is the biggest impact humans have on the planet. It’s the biggest driver of deforestation, user of freshwater, source of greenhouse gas emissions, and cause of the current mass extinction of species. Yet one-third of all food is wasted – 1.3 billion tons per year. Toast’s mission i s to change this.

Toast’s co-founder & Chief Operating Officer, Louisa Ziane, explained “We want to celebrate positive action we can all take including not wasting food, eating a more plant-based diet, and supporting more responsible business models like B Corp.”

“But” Louisa said, “we need ambitious, sustained action by policy makers, businesses and citizens to deliver transformational, systemic change. We need legally-binding targets and progressive environmental protection policies that will force a ll  businesses to act and create an incentive for ecological renewal.”

In the lead up to COP26, the 26th UN Climate Change Conference of Parties, Toast i s releasing a series of limited edition beers with fellow B Corps Divine Chocolate, teapigs, Hobbs House Bakery, Oddbox, Rebel Kitchen, Rubies in the Rubble and Cafedirect. Each beer will highlight an element of the ecological crisis,  and the change needed to the food system to meet the goals set in the Paris Agreement at COP21. It’s time to Rise Up (over a beer that does the world of good).

The beers will be available at toastale.com  from 25th February (from £3.50 per 440ml can), at independent retailers and on draught at Waitrose Unpacked  stores.

Toast open sources a recipe for home brewers and collaborates with breweries all over the world to scale its impact. All its profits go to charities fixing the food system. Toast is a social enterprise and the first UK brewery to become a B Corp.

Hobbs House Bakery is a fifth generation family bakery with a mission of handmade Real Bread for everyone. I t uses ethical and sustainable decisions to reduce its flour footprint, including local sourcing and avoiding waste by donating it to the local community in support of the Real Bread Campaign’s No Loaf Lost. Hobbs House Bakery is signed up to The Real Bread Loaf Mark scheme to give customers their at-a-glance additive-free assurance. It is also a certified B Corp.

Run by the food and farming charity Sustain, the Real Bread Campaign‘s mission is to make bread better for our communities and the planet. Its work includes lobbying for an Honest Crust Act of improved loaf labelling and marketing, the ‘ Together We Rise’ therapeutic and social baking initiative and the ‘ Better Bred Bread’ project to bring improvements from seed-to-sandwich chain.

Real Bread Week is the annual, international celebration of additive-free loaves and the people who make them. From 20 – 28 February, everyone is encouraged to buy Real Bread from a local, independent bakery, or make their own at home.