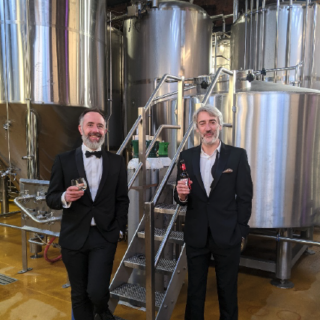 The award comes after a challenging year for North: The pandemic saw their bars switch between being closed, being open as bottle shops, and being open as bars numerous times. The judges praised the creativity with which North approached Covid 19, including their ‘Buy the NHS a pint’ scheme, focus on sustainability, and record e-commerce turnover.

Alongside dealing with the challenges of Covid 19, 2020 also saw North Brewing Co undertake their biggest project to date: The careful restoration of a 21,000 square foot former steelworks, Springwell.

Springwell demonstrates North’s ambitions for 2021:
• North’s brewing output will increase to 16,000 hectolitres (2.8 million pints a year).
• Springwell sees a multi-million pound investment in the local area
• The expansion is creating new jobs and securing many more despite the Covid 19 pandemic
• North have successfully received a Business Growth Programme Fund from the West Yorkshire Combined Authority to support the project and generate 7 further jobs in the business.

A new Brewery Tap at Springwell

A 500 person capacity taproom will pour draught North beers fresh from the brewery, with festivals, events, brewery tours, street food traders, a merchandise shop, pop up art exhibitions and space for private hire.
• The taproom will open for outdoor drinking on Friday 16th April.
• The taproom will be home to two street food kitchens – Little Bao Boy and Kerbside Kids. These kitchens are being installed in two shipping containers on the site.

“Winning this award at the end of an incredibly challenging year means everything to us. It’s a testament to the flexibility and creativity of our team, and the support that we have received from our customers over the past twelve months. Whilst 2020 has been a tough year, we are so inspired by the space that we have built at Springwell. Creating a hub for North at the brewery will strengthen the connection between our team, bars, brewery and wider community. We are now focused on preparing to re-open the bars and bottleshops, and welcome the first guests to the taproom at Springwell.”

They have since expanded the North Bar family of bars to seven venues in Leeds and the surrounding area: from Preston Bar nestled in leafy Oakwood to the cycling hub at North Bar Social in Otley and the scandi-inspired North Bar in Harrogate. In 2015 they turned their 10- year dream of making their own beer into a reality by opening a 15bbl brewery, North Brewing Co, featuring a 200-person capacity tap room, just half a mile from their original flagship North Bar in Leeds. North Brewing Co moved to their new home, Springwell on Buslingthorpe Lane, in November 2020.
Press release from North Brewing Co
Contact:  sarahhardy@northbrewing.com