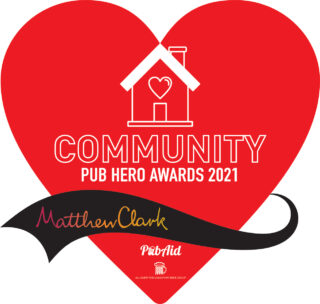 Pubs urged to win recognition for their community support

Pubs who have supported their local communities during the Covid lockdowns are being urged to enter the PubAid Community Pub Hero Awards, sponsored by Matthew Clark, before the deadline of 30 November.

Inspired by the support provided by thousands of pubs for their communities, PubAid reshaped its annual Charity Pub Awards as the Community Pub Hero Awards. The awards are once again supported by the All-Party Parliamentary Beer Group, whose member MPs are nominating pub heroes from their constituency.

Pubs can enter the competition by completing a brief form on the PubAid website and all entrants will be featured on PubAid social media channels.  After the closing date, judges will review entries received and publish a shortlist. The overall Community Pub Hero will be announced in early 2021.

Co-founder of PubAid, Des O’Flanagan said: “We’re delighted that many pubs across the country have already entered our competition and it’s been wonderful to read about the great work done by so many, whether offering vital supplies for local residents, cooking hot meals for the elderly or keeping people connected through online quizzes or chats.

“With a month to go until entries close, we’d urge any pubs who have supported their communities to put themselves forward and gain the recognition they deserve.”

Richard Hayhoe, Marketing Director, Matthew Clark added: “We’ve been humbled by the many pubs who helped their communities during the Covid-19 outbreak, despite facing uncertainty themselves. Their efforts, during the national lockdown and the subsequent local restrictions, have provided a vital lifeline to countless people, and prove that pubs are genuinely a force for good in their communities.”

Mike Wood, MP for Dudley South and Chairman of the All-Party Parliamentary Beer Group, said: “These awards are a great opportunity for MPs to celebrate how landladies and landlords in their constituencies have stepped up to the mark to support their community during this dreadful pandemic. Yet again we have seen that pubs are the antidote to isolation.”

PubAid is a working party created in 2009 to promote UK pubs as a force for good in their local communities, sharing the message that they raise over £100m per year for charities and contribute £40 million to grassroots sport. PubAid runs the World’s Biggest Pub Quiz, which has raised £750,000 since its launch in 2016, and the Charity Pub of the Year Awards, which ran in 2018 and 2019.