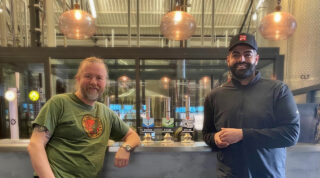 Yorkshire’s progressive Ossett Brewing Company has taken in three ‘shining star’ beers from its brewpubs to relaunch under the mothership brand.

The fast growing trio of White Rat, Black Voodoo and Butterley will now all be brewed at the main brewery under the Ossett banner while retaining their own distinctive new look.

Sales of the hoppy pale ale, White Rat (4.0%abv) – originally brewed at the Rat Brewery housed underneath the Rat and Ratchet pub in Huddersfield – have soared in recent times, gathering a cult-like following. To keep up with current demand for this excellent beer, White Rat has been successfully brewed at Ossett over than the past three years.

Owner Jamie Lawson has stated that the brews will be faithfully replicated at the main brewery. He said: “These shining stars of our microbreweries enjoy an ever-growing fan base, but increasing production in their home breweries was not possible. It was time to firmly place them under the Ossett portfolio.

“Demand for White Rat is now pretty much on par with our leading brew, Yorkshire Blonde, which is quite incredible. As true White Rat fans know, we have brewed it successfully at Ossett for over three years. So I can assure any doubting diehard fans that the beer remains as brewed previously. If anyone says differently, well, that’s fantasy, just fake news.

“I can also reassure Black Voodoo and Butterley fans that the character of the brews will remain untouched. We have simply tweaked the design but certainly not the beer. The creative new branding is presented in a more clean and modern way, allowing the trio to sit alongside the ever so popular Ossett core range, Yorkshire Blonde, Silver King and Excelsius.”

Originally located at the back of Brewers Pride pub in Ossett, the brewery was founded by Bob Lawson in 1998. Silver King won Ossett’s first national award in 2001 as a speciality beer and Excelsius was SIBA National Champion three times over two decades.

In recent years Ossett has invested more than £3m in brewing capacity, warehouse facilities and new packaging resources, together with the new SALT Beer Factory at Saltaire, Bradford. SALT is an award winning, hop forward, micro-brewery and entertainment venue in a Grade II Edwardian tram-shed at the heart of the UNESCO World Heritage village.

The Rat Brewery is located at the Rat & Ratchet in Chapel Hill, Huddersfield, and was established as a brew pub in 1994. After brewing ceased Ossett took it over in 2004 and recommenced brewing in 2011 with a 30bbls per week capacity. White Rat is the flagship brand.

Fernandes brew pub in Kirkgate, Wakefield, opened in 1997, was taken into the Ossett family in 2007. Riverhead brew pub opened in Peel Street, Marsden, in 1995 and joined Ossett in 2006 with a two barrel brew length.

Ossett has won many national and regional awards since the brewery’s inception in 1998. Last year Ossett collected three major accolades form the World Beer Awards. Silver King (4.3%abv) claimed gold in the English Pale Ales category while premium Excelsius (5.2%abv) was runner up with silver. Further acclaim came with Yorkshire Treacle (4.8% abv) snatching silver in the hotly contested UK Flavoured Porter and Stouts category. The business was also hailed as Brewery of the Year 2020 in the Leeds and West Yorkshire Prestige Awards.