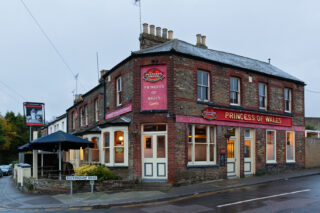 The new licensees at The Princess of Wales in Margate know a thing or two about running a pub – they’ve been doing it for almost 30 years.

Sharon and Ray Summers have just moved to the pub in Tivoli Road after a six-year stint running the town’s oldest pub, the Northern Belle in Mansion Street.

Both pubs are owned by Shepherd Neame, and it was the community feel and ‘olde worlde’ charm of The Princess of Wales, which dates back to the 1860s and is also around four times the size of the Northern Belle, which prompted the experienced pair to make the change.

Sharon said: “We wanted a new challenge but to still stay in a characterful pub. The Princess of Wales isn’t as old as the Northern Belle, which was built in 1680, but as soon as we came to see it, I could see the potential.”

The couple bring with them a wealth of experience in the industry, having run hostelries both large and small in South London and Berkshire over the past three decades, working for other pub companies before joining the Faversham-based brewer six years ago. But their history in pubs goes further back than that. “We met in the pub,” laughs Sharon, “and now here we are, all these years later.”

Sharon runs the business while Ray is now retired. Since taking on the pub they have already brightened the interior, and introduced DJ nights playing ska, soul and reggae. The next project on their to-do list is a kitchen refurbishment in the New Year, which once completed will mean the introduction of bar meals cooked by Sharon. The pub also has a large beer garden perfect for the warmer months, so the pair aim to revamp the garden next spring.

Since their move, they have been pleased to welcome a number of their old regulars from the Northern Belle. “It has been really lovely that lots of our old customers are still with us. They’ve become friends over the years,” said Sharon.

The pub opens from 3pm on Mondays to Thursdays, and from noon the rest of the week. To find out more go to www.princessofwalesmargate.co.uk