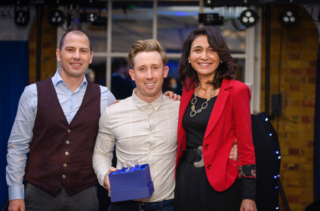 Sharp’s Brewery’s head brewer Aaron McClure has been named Young Brewer of the Year at the Brewers Choice Awards. McClure, who has been part of the Sharp’s team for more than a decade, was recognised for spearheading the brand’s operation at its Rock brewery, which produces more than one million pints every week.

Under Aaron’s leadership, the team developed a pioneering brewing method for Doom Bar Zero, the UK’s first non-alcoholic amber ale, that retains a similar flavour profile and style to Doom Bar while achieving 0.0% alcohol – significantly more difficult to brew than 0.5%.

The Brewers Choice Awards is judged by a panel of leading industry experts, and the Young Brewer of The Year award is designed to recognise the very best in UK brewing talent.

Head brewer at Sharp’s Brewery, Aaron McClure, said: “This award is testament to the skill and effort of our team at Rock. We are all committed to the highest standards in everything we do and being pioneers in the industry. While I’m proud that my role in this has been recognised, it’s the whole team around me that made it possible.

“We will continue to innovate and explore new ways to deliver the products that we know people love and even more exciting new options for them to try.”

Tim Sheahan, Editor of the Brewer’s Journal, said: “Producing in excess of 1 million pints each week, including a host of experimental pilot project beers, is no small feat. Aaron is a shining example of the wealth of fantastic, driven young brewers we have in the UK and is fully-deserving of the title of Young Brewer of The Year.”

Sharp’s Brewery is a modern brewer, based in Rock, Cornwall, which has grown rapidly since its foundation in 1994, increasing staff numbers in the last 10 years from 70 to 114.Sharp’s is the largest brewer of cask beer in the South West, and Doom Bar is probably the most successful cask beer of its generation and is currently the UK’s no.1 cask and premium bottled ale brand *.

A testament to the quality of each drop of beer, Sharp’s has a tally of over 100 international brewing awards, which in 2021 included Sea Fury winning the highest accolade of ‘World’s Best Pale Bitter’ in the World Beer Awards as well as Country Winner in the pale ale category. Sharp’s Offshore Pilsner also won Country Winner (lager category) and Wolf Rock and Sharp’s Camel Valley Pilsner both earned Silver medals, while Sharp’s Atlantic golden ale was awarded a Bronze. Sharp’s brand-new cider product, Cold River Cider also secured silver at the International Cider Challenge 2021. Sharp’s also won a total of six awards across three categories in the 2021 International Beer Challenge including gold in the International Cask Beer category for Atlantic Pale Ale.

Sharp’s Brewery is a proud supporter of grassroots rugby in Cornwall and sponsors a number of local clubs. In 2019, Sharp’s turned the tables on the music industry through ‘Keynvor’, a partnership with Mercury Music Prize nominee Nick Mulvey to produce the first playable vinyl made from recycled ocean plastic found on the Cornish coast. Proceeds from sales of the exclusive ‘Ocean Vinyl’ including digital streams continue to go to Surfers Against Sewage, raising around £10k to date. Sharp’s is an official partner of Surfers Against Sewage, supporting their Million Mile Beach Clean campaign in 2021 and helping to protect British coastlines from pollution, including plastic waste. Website: www.sharpsbrewery.co.uk