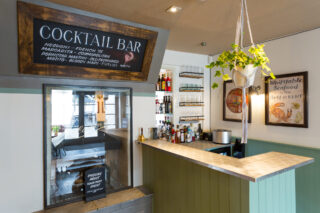 Customers returning to Whitstable’s East Kent, which reopens its doors on Monday (April 12) for outdoor drinking and dining, will notice several changes at this iconic venue, both inside and out.

Licensee Natalie Wickham, who took over the Oxford Street pub back in July 2018 alongside husband Andrew, has taken advantage of the most recent Covid-19 lockdown period to add a new outdoor pizza kitchen, complete with a wood-burning oven.

Inside the Shepherd Neame-owned pub, a separate cocktail bar has also been added.

“It’s been a very busy lockdown period for us,” said Natalie. “We decided to make the most of the time by putting the next stage of our plan for the East Kent into place, which means expanding what we are able to offer customers.”

The decision to add a designated pizza kitchen, which has been built as an extension to the rear of the pub, was taken in part to increase customer choice and in part to take some of the pressure off the existing kitchen.

“I suppose you could say we’ve become victims of our own success,” explained Natalie. “It’s a small kitchen in the pub itself and we are producing a huge amount of freshly cooked food from it. We were unable to make the kitchen bigger, so the introduction of the pizza kitchen outside means we now have two cooking areas.

“The look and the smell of the pizza oven is great, and the pizza itself tastes amazing too. We’ve gone down an authentically Italian route, and in all there are 12 different pizzas on the menu.”

Another new addition is a dedicated cocktail bar, which has been built from scratch by Natalie’s husband Andrew.

“We’ve never offered cocktails before but we’ve always had lots of requests, so we have responded to customer demand. We had some space that wasn’t being used, and the bar that Andrew created looks as if it has always been there.”

The pub’s extensive garden area has also been renovated and landscaped, with the addition of a stylish new covered area making it customer-friendly all year round.

“We can now accommodate customers outside, whatever the Whitstable weather throws at us,” said Natalie.

“We can’t wait to reopen and are already fully booked for the first couple of weekends.  The whole team is super excited to show off the new additions to the pub.”

Yet another exciting development at the East Kent during lockdown was the birth in September of Natalie and Andrew’s first child, Oliver. “All in all it’s been a few months we will never forget,” said Natalie.

For more information call the East Kent on 01227 770773 or visit theeastkentpub.com

The East Kent was first established in1802, as the East Kent Tavern. The current grand building dates from 1860 and was developed to take advantage of the new railway connection between Whitstable and London, which was established the same year.

Shepherd Neame temporarily closed the doors of its 312 pubs and hotels on November 5 last year, along with its brewery shop, in line with Government advice.

Following the Government’s confirmation on Monday (April 5) that pubs can open outside spaces from April 12, before being able to offer indoor service from May 17, preparations are now ramping up to welcome back customers at those Shepherd Neame pubs with suitable outside spaces.

A full list of the 201 sites reopening on Monday is available here: https://www.shepherdneame.co.uk/pubs-hotels-reopening-2021.

The rest of the estate will reopen on May 17. Shepherd Neame’s brewery shop in Court Street, Faversham, will also reopen on Tuesday (April 13).