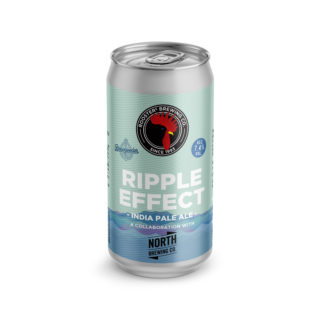 Two of Yorkshire’s most acclaimed breweries have come together to create a new small-batch beer, as part of a global brewing initiative aimed at raising money to provide clean water for 100,000 people in developing countries.

Made from a blend of cascade, chinook, citra, crystal and lotus hops, Ripple Effect (7.4% ABV) is a bold and juicy IPA, which will be available in 440ml cans (£3.79 per can) through Rooster’s online shop from Saturday 21st March.

The two pioneering breweries teamed up to create the beer in aid of Brewgooder’s Global Gathering, a charitable project created to provide clean water to communities across the world, with each brewery donating £500 in support of the initiative.

Commenting on the collaboration and the name of the beer, Rooster’s head brewer Ol Fozard said: “It’s always fun to team up with the crew at North Brewing Co and it was made all the more special given the purpose we had in mind.

“The name Ripple Effect seemed fitting as we hope that through this beer we can help raise awareness of the lack of clean drinking water in some parts of the world and drive donations in support of the Brewgooder Global Campaign, which is playing a key role in helping to address this important issue.”

John Gyngell, co-founder of North Brewing Co, said: “We were so pleased to be invited to partner with Rooster’s on this project – they were one of the first breweries to get us into American hops and we have poured their beers at North Bar in Leeds for years. The beer scene in Yorkshire is thriving, and we feel very lucky to be a part of it. It feels like a real community, and it’s great to see a community pull together to support such a good cause.”

For further information or interview requests, please contact Matt Thompson on mattthompsonpr@gmail.com or 07587 418710.

As one of the originators and pioneers of the craft beer movement, independent, family-owned Rooster’s Brewing Co. has been creating consistently quality, award-winning traditional and craft since 1993. Beer is currently packaged in traditional casks, as well as keg and can.

Three decades on, Rooster’s continues to turn heads with its uncompromising, forward-thinking approach to brewing a wide range of consistent, easy-drinking, well-balanced beers that always deliver on quality and flavour.

They have since expanded the North Bar family of bars to seven venues in Leeds and the surrounding area: from Preston Bar nestled in leafy Oakwood to the cycling hub at North Bar Social in Otley and the scandi-inspired North Bar in Harrogate. In 2015 they turned their 10-year dream of making their own beer into a reality by opening a 15bbl brewery, North Brewing Co, featuring a 200-person capacity tap room, just half a mile from their original flagship North Bar in Leeds.

The core range and seasonal specials epitomise what they look for in beer: big juicy flavours with tonnes of hops; fun, playful and interesting flavour combinations; classics that demonstrate an uncompromising approach to quality. In 2018 they created a third business – North Brewing Leisure, this contains the front facing bar operation of the brewery. The first of these opened in November 2018, Leeds City Tap, located on Sovereign Street in Leeds.

A charitable campaign which sees Brewgooder working with hundreds of brewers all over the globe to create and launch beers to coincide with the World Water Day weekend of 20-22nd March 2020. Each brewer donates £500 or more for Brewgooder Foundation rehabilitation and construction projects across Malawi, with the aim of empowering the lives of 100,000 people.