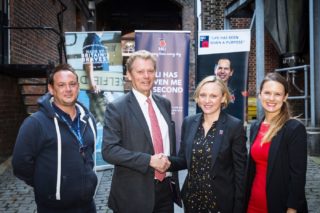 Faversham-based brewery Shepherd Neame has named Royal British Legion Industries (RBLI) as its Charity of the Year for 2019/20.

Based near the brewery at Aylesford near Maidstone, RBLI is a national charity supporting not only British Armed Forces veterans, but civilian men and women of all ages, specifically those with disabilities and the long-term unemployed. It aims to support its beneficiaries to find work and lead independent lives.

Facilities at the RBLI Village in Aylesford include a purpose-built nursing home, supported living apartments and emergency accommodation. There is also the Base Camp community centre and café used not only by RBLI beneficiaries but the local Aylesford community.

The Village is also home to RBLI’s social enterprise Britain’s Bravest Manufacturing Company (BBMC). More than 70% of BBMC staff have a disability, health condition or have an Armed Forces background, and produce road signs, wood pallets and fulfilment projects.

Shepherd Neame Chief Executive Jonathan Neame said: “It is RBLI’s centenary year, so we thought it was the perfect opportunity to support this fantastic British charity, based near us in Aylesford. We are committed to supporting the community we serve, and are delighted to be able to offer our support to such a worthy cause. In addition to raising money for the charity during the year ahead, we also hope that our staff will be able to donate their time, as there are extensive volunteering opportunities at the RBLI Village. We are also planning to offer practical support for RBLI beneficiaries in the form of work placements and mentoring at the brewery and around our pub estate.”

It is Shepherd Neame’s second Charity of the Year partnership following the relaunch of its Sheps Giving charitable arm in 2018. The company’s Sheps Giving committee co-ordinates the donation of thousands of pounds worth of beer each year, along with vouchers for its pub and hotel estate, to local groups and individuals in support of their fundraising activities.

The Sheps Giving committee will be working with RBLI to organise fundraising activities at the brewery and across its pub estate throughout the next 12 months.

Steve Sherry CMG OBE, RBLI chief executive, said: “We are incredibly proud to have been chosen as Shepherd Neame’s Charity of the Year, particularly in our Centenary Year. Shepherd Neame has an immense history throughout Kent and a strong tradition of putting their support behind worthy causes. So we know this partnership will have a hugely positive impact on our ability to improve the lives of veterans and people with disabilities who are in desperate need of support.”

Find out more about Sheps Giving at www.shepherdneame.co.uk/sheps-giving

Established in 1919, Royal British Legion Industries is an independent national charity aiming to provide employment, training and support to members and veterans of the British Armed Forces, their families and dependents; as well as those with a disability or health condition and those who have been long term unemployed.

RBLI’s social enterprise which directly employs over 100 people, more than 70% of whom are veterans, have a disability or both. We manufacture a range of products for both the public and private sector. The enterprise reinvests its surplus meaning that even more employment opportunities are available for injured or impaired ex-forces personnel and people with disabilities and health conditions.