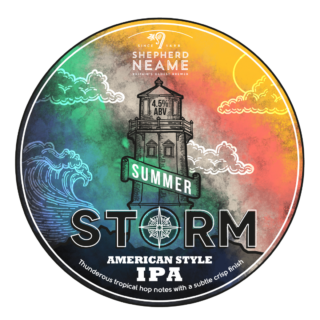 A limited edition cask ale which proved a huge hit with drinkers when it was launched by Shepherd Neame back in 2019 is now returning for summer 2022.

Full-flavoured and smooth, Summer Storm (4.5% ABV) is a modern IPA boasting tropical and citrus fruit notes courtesy of a combination of English Target hops and Amarillo, Centennial and Citra from the US.

Shepherd Neame’s Director of Brewing Mike Unsworth said: “We launched Summer Storm in August 2019 as part of our Cask Club initiative, and it was one of our most popular releases, so we decided to bring it back again this summer.

“It’s a New World-style sessionable IPA bursting with tropical and citrus fruits combined with a mellow bitterness and slightly spicy backbone. The flavour and aroma hops give a slight hop haze to this light amber beer, which really delivers on taste.”

About Shepherd Neame
Shepherd Neame has been based in the market town of Faversham, Kent for over 300 years. Perhaps best known for great British classic ales such as Spitfire Amber, which carries the Royal Warrant, its diverse portfolio includes Five Grain Lager, Bear Island East Coast Pale Ale and Bear Island Triple Hopped Lager, and the Whitstable Bay Collection. It also brews international lagers under licence including Samuel Adams Boston Lager and premium Thai lager Singha. The independent family business boasts an award-winning visitor centre and more than 300 pubs and hotels throughout London and the South East, from the historic heart of the City to the Kent coastline.