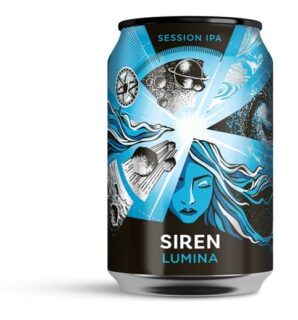 Siren Craft Brew, the independent Berkshire brewery, will today unveil Lumina, the latest Session IPA to join the brand’s range of flavour-forward, quality beer. Lumina unifies years of experience, experimentation, and evolution to create Siren’s most universal beer to date. Expertly brewed in Finchampstead, Lumina is crafted with hoppy aromas of tropical mango and pineapple, enlightening your palate with an explosive flavour, flashes of citrus highlights and a refreshingly balanced bitterness. A beer that everyone can enjoy and appreciate.

Inspired by the celestial and galaxies far, far, away, Lumina has been painstakingly crafted to be the shining light of Siren’s flagship range.

Siren Craft Brew is heavily inspired by the sirens of Greek mythology. Just as the Siren’s voices were said to entwine into a complex, layered melody, so do the ingredients that go into making great beer. Lumina is no different, a central burning energy with themes of wonder, luminosity and navigation weaving in and out of the night’s sky mirroring the shooting combination of flavours.

In its brewing process and ingredients, Siren Craft Brew uses only the crème de le crème of malts (Marris Otter), hops (dry and kettle varieties are used at different stages of the brew for optimum flavour and aroma) and yeast (Vermont) for Lumina. Marris Otter, which is considered the ‘Rolls Royce’ of

malts, acts as the launch pad from which Lumina is layered upon, blazing a touch of sweetness in flavour before take-off. Both flaked and malted oats have been combined. Siren strategically did this to add depth and volume to the body to ensure a smooth sensation when drinking.

The new beer is both vegan friendly and gluten free, making it accessible for all requirements.

The session IPA has been years in the making for Siren Craft Brew (you could say Siren has been waiting for the stars to align!), adding a beer to its flagship range is always meteoric and so the master brewers wanted to make sure they were bringing something new to this solar system. Siren has spent many moons experimenting with different combinations of the best quality malts and hops to hone and perfect its Lumina recipe.

Siren Craft Brew is a trailblazer in the drinks industry. Based in Finchampstead, Berkshire, the brand is on a mission to introduce modern and flavour-forward beers for everyone to adore.

The Lumina from Siren Craft Brew can be purchased directly from www.sirencraftbrew.com and will also be available from leading independent retailers. Priced at £2.00 per 330ml can or £22.00 for a 12 can box.

The beer will also be available as a cask and keg for pubs once lockdown rules are relaxed.

To celebrate the launch of Lumina, Siren Craft Brew is set to host a virtual stargazing event for the most loyal of its fans with both the founder Darron Anley and Oxford University astrophysicist Dr Becky Smethurst. Guests will be able to enjoy the latest beer launch, inspired by the celestial, whilst absorbing the wonders of the night’s sky.


Siren Craft Brew has meticulously selected only the very best ingredients to ensure Lumina offers optimum flavour. Please find a breakdown of these below:

▪ Marris Otter, a UK heritage barley, is the backbone of many world class beers and considered the ‘Rolls Royce’ of malts. This is the launch pad from which Lumina is layered upon, blazing a touch of sweetness in flavour

▪ Both flaked and malted oats. Siren decided to use a combination of oats to add depth and volume to the body to ensure a smooth and soft sensation when drinking. The oats make up approximately 15% of the grist

▪ For kettle hops, a combination of Hallertau Blanc, Mosaic and Chinook are mixed at the whirlpool stage of the brew. This offers just the right amount of bitterness to the beer, balancing things out nicely and making it so ‘sessionable’. Using hops at this stage also drives punchy tropical fruit flavours

▪ Siren dry-hop Lumina with Azacca, Mosaic, Ekuanot and Hallertau Blanc. Hopping this late in the process is the reason the aroma shoots out of the can so immediately, bursting with mango, pineapple, and orangey notes

▪ Lumina is fermented with Siren’s unique house-strain of Vermont yeast, injecting subtle peach and apricot flavours. It is perfect for hoppy, hazy beers and Siren have it to thank for most IPAs and pale ales in its flagship range

Headquartered in Berkshire, Siren Craft Brew is a passionately independent brewery that is truly believes there is a beer for everyone. Brewed and packed in Finchampstead since 2013, the multi award-winning brewery is proud of its quality, unfiltered, modern, flavour-forward beers using only the best ingredients.

Siren’s top accolades include being named the ‘Best Brewer in England’ by Ratebeer users in 2015, plus a Supreme Champion Beer of Britain award by Campaign For Real Ale in 2018.

The Siren Craft Brew range is firmly rooted in Greek mythology. It is said the sirens’ voices entwine into a complex, layered melody, and so do the ingredients that go into making great beer.

Starting seven years ago as a team of three, Siren Craft Brew has blossomed into a team of over 40 people with three million pints (five million cans) produced in 2019. Founded by Darron Anley, the modern brewery now exports to 18 countries worldwide, self-distributes throughout the UK and is now stocked by Waitrose, Morrisons, leading chains plus independent pubs, shops, and restaurants (including Michelin starred sites).

Siren Craft Brew also sells direct to the consumer through its website and on-site tap room. The company has a prolific brewing schedule, on average

releasing an experimental beer every week. A drinks industry trailblazer, Siren is a leader in barrel ageing and the interplay between wood and beer.