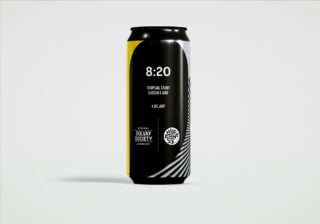 8:20 is a limited edition 4.8% Tropical Stout with Claussenii & Sabro — brewed in collaboration with Wilderness Brewery

8:20 is bistre-coloured with tasting notes of chocolate, coconut and pineapple. The beer embodies the contrast of light and dark: rich, dark roasty flavours of chocolate and coffee provide a backbone of Sabro hops to shine through giving elements of coconut and mango before a glimmer of pineapple from Claussenii yeast pokes through.

The inspiration for 8:20 is the fact that it takes 8 minutes and 20 seconds for the sunlight to travel the darkness of space and illuminate the Earth’s surface.

“The plan before Covid-19 was to switch from bottles to cans. This has now slowed and the change will take place on a batch by batch basis.

“There’s no doubt that canned beer has become much more common with bottles taking the hit. Cans can sometimes offer better quality beer than bottles, are easier to carry and are typically more environmentally friendly so we will slowly be progressing our entire core range into cans.

“8:20 and Little Abacus, our recent Petite Saison special released exclusively in mini-keg, were originally both destined to be keg only so we had to innovate.” – Roman Hochuli, Founder & Head Brewer

The creation of Halmos, Solvay Society’s flagship Belgian Pale Ale and the retiring of two other core range beers gave them the opportunity to reflect on their beer and brand as a whole, deciding to create a modern look to truly showcase their modern Belgian beer.

“The launch of Halmos into our core range gave us the opportunity to think about how our look could be given an update. We were keen to maintain the aesthetic theme of scientific diagrams related to the beer’s name, but to present this in a more modern, eye-catching way and with more modularity to the overall design.” – Roman Hochuli, Founder & Head Brewer

Due to the uncertainty around pubs re-opening and a decrease in keg sales has meant that Solvay Society has scaled back production and the redesign of their brand.

Their core range will gradually be released in cans as the next batches are brewed as they work to find a suitable partner to help them can the beer in this current climate.

Solvay Society was founded in 2014 brewing modern Belgian beer on the London-Essex border. Their founder takes inspiration from his Belgian heritage but has been a Londoner for over a decade. Roman uses his scientific background and PhD in Physics to make modern Belgian beer, focusing on the invention and the art of taste.