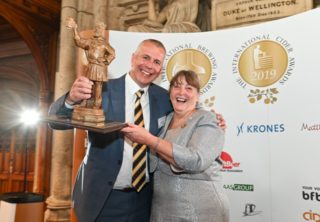 Narrowed down from 133 medal winners, the final round of accolades – the Championship Trophies – recognise nine beers and three ciders as outstanding examples in their respective categories.

First brewed in collaboration with Moscow’s New Riga’s brewery, Black Square was awarded a gold medal for ‘Strong Beer above 10% ABV’. It went on to be named overall champion in the ‘Strong Beer’ category, in which it was nominated amongst four other award-winning international brews.

Founded in 1886, the International Brewing Awards aim to reward and recognise the innovation, attention to detail and hard work that goes into beer and cider production. The awards are judged by highly regarded Brew Masters and Head Brewers from around the world.

Roger Ryman, Brewing Director at St Austell Brewery and Bath Ales, said: “We’re so proud to have been awarded a Championship Trophy for Black Square. I was delighted when I first heard that we’d won a gold medal – something which has been a personal goal of mine since joining St Austell Brewery as Head Brewer, twenty years ago. To go on to be named best in class, in the Strong Beer category, is a huge honour.

“The five medals we’ve been awarded are a culmination of many years of hard work and reflect the dedication and talent of our brewing teams in Cornwall and Bath.”

Ruth Evans MBE, Director of Brewing Technology Services who oversee the awards said: “The Championship Trophy winners’ announcement is the culmination of a lengthy judging process, where our panel of 50 industry professionals vote for those beers and ciders that they would be prepared to stake their future success on.

“The quality of the entries we receive each year is exceptionally high and our twelve Championship Trophy winners represent the crème de la crème of their respective categories. Congratulations to all!”