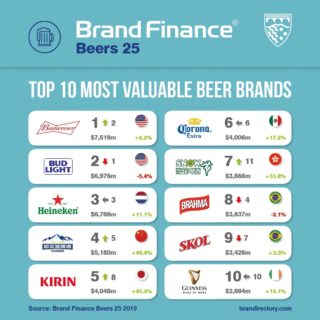 Budweiser has claimed the top spot as the world’s most valuable beer brand for the first time, overtaking long-standing leader Bud Light, according to the latest report by Brand Finance, the world’s leading independent brand valuation consultancy.

Budweiser’s brand value has increased 6% to US$7.5 billion, following the immense success of its global sponsorship campaign of the 2018 FIFA World Cup. The campaign, the brand’s most expensive to date, reached 3.2 billion football fans globally, facilitating accelerated growth in new markets including South Africa, Colombia, China and Australia.

Budweiser and Bud Light (down 5% to US$7.0 billion), the flagship brands of Belgian brewing giant AB InBev, have had to contend with the changing consumer drinking habits across the US. The general decline in beer consumption across millennials, and the preference for healthier alcohol-free alternatives have contributed to the slowdown in their brand value growth compared to previous years.

The AB InBev portfolio still dominates the rankings, however, with 11 brands claiming spots in the top 25, down from 13 last year. The brewer closed the third largest acquisition in history in 2016, after merging with SABMiller, and has since been tackling its mountainous debt pile, predominantly through sales drives.

China’s Snow is the fastest-growing brand in this year’s Brand Finance Beers 25 ranking and has broken into the top 10 for the first time, with an impressive 52% rise in brand value to US$3.7 billion. Snow is the best-selling beer in the world, clocking up 101.2 million hectolitres of beer sold per year, more than double that of Budweiser’s sales. The brand, which historically has only been sold in China, has made a number of strategic partnerships in order to raise its global presence, notably with Dutch brewing giant Heineken and America’s Molson Coors.

Tsingtao (up 49% to US$1.7 billion) has jumped up 9 places in the ranking, more than any other brand. The brand continues to retain its loyal customer base in its home country and is also the most exported Chinese beer, sold in over 100 countries and regions globally. As with other Chinese brands, Tsingtao faces fierce competition from other global brewing giants but despite this, Tsingtao has recorded strong sales growth over the last year.

“As you can see across this year’s ranking, it is the Asian, particularly Chinese, beer brands that are seeing the highest brand value growth. With demand for beer at an all time high in China and predictions of inflated growth over the coming years as a result of greater disposable income from the emerging middle class, this trend looks set to continue. If these brands begin to expand beyond China and into new markets, we could potentially see some very stiff competition to established Western beer brands.”

One to watch: BrewDog

Innovative Scottish craft beer brand, BrewDog, is the highest new entrant in the ranking in 19th position, with a brand value of US$1.5 billion. Now 11 years old, the brand is undertaking ambitious growth plans across key international markets, with new breweries and bars in the pipeline both at home in the UK and abroad. Its flagship beer, Punk IPA, is already the number one craft beer in the UK and the brand is striving to make it the beer of choice internationally.

The brand is committed to expansion, with gin and vodka already in its portfolio, it is widening its reach further by entering into the whiskey market, in a bid to make it more playful.

In 2018, BrewDog announced its foray into the hotels business, opening the doors to the world’s first craft beer hotel, The DogHouse.

In addition to measuring overall brand value, Brand Finance also evaluates the relative strength of brands, based on factors such as marketing investment, familiarity, loyalty, staff satisfaction, and corporate reputation. Alongside revenue forecasts, brand strength is a crucial driver of brand value. According to this criteria, Colombia’s Aguila is the world’s strongest beer brand with a Brand Strength Index (BSI) score of 88.41 out of 100 and a corresponding AAA brand strength rating.

Aguila (brand value down 18% to US$1.1 billion), part of AB InBev’s portfolio, is Colombia’s second most popular beer and its consistently low prices ensures high customer retention. The brand, which has sponsored the national Colombian football team since late 2014, lowered its prices further in 2018 to celebrate the FIFA World Cup.

Every year, Brand Finance values 5,000 of the world’s biggest brands. The 25 most valuable spirits brands are included in the Brand Finance Beers 25 2019 ranking.

Brand value is understood as the net economic benefit that a brand owner would achieve by licensing the brand in the open market. Brand Strength is the efficacy of a brand’s performance on intangible measures relative to its competitors.

Additional insights, more information about the methodology, as well as definitions of key terms are available in the Brand Finance Beers 25 2019 report.

Data compiled for the Brand Finance rankings and reports are provided for the benefit of the media and are not to be used for any commercial or technical purpose without written permission from Brand Finance.