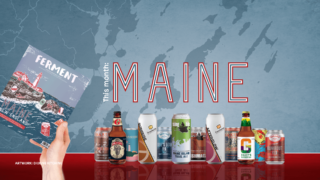 Craft Beer discovery club Beer52 has broken new ground this month, with a box of UK-first beers from America’s hottest up-and-coming beer state, Maine. In Beer52’s upcoming case, they feature Maine-made craft beers for their customers to get a taste of the booming beer scene in the United States east coast.

The subscription service discovered the delicious range of beers after seeing the Maine Brewers’ Guild’s Maine Brew Box – a giant kegerator converted from a 40ft. refrigerated shipping container – to England as a global marketing effort.

Callum Stewart, beer buyer at Beer52 said: “The Maine Beer Box was a great opportunity to sample and discover the strength and depth of the craft beer scene in Maine. We know the style of beer they produce will resonate with our customers and we’re excited to hear what they think about this month’s case.”

Beer52 and the Maine Brewers’ Guild have been in conversation and planning for the Maine box for the past year. Last month, Beer52 travelled from the UK to New England to meet each of the brewers and bond over beer and copious amounts of seafood.

Heather Sanborn, co-owner of Rising Tide Brewing Co. shares: “We were intrigued by the idea of shipping our beer across the Atlantic in refrigerated containers, and then having it go quickly out to British consumers through a subscription model, while it is still super fresh.”

“It’s been a long and rewarding process with the beers finally landing in the UK in March,” Stewart explained. “The cases will be available to Beer52 subscribers commencing April 13 and will be distributed to members over a four-week period.”

Maine may be small, but it is no underdog when it comes to brewing craft beer. The state is home to more than 120 breweries and produces hundreds of beers. The most populous city in the state, Portland, is just shy of 67,000 residents and claims the title of the most breweries per head in the country.

The breweries chosen in this month’s case were carefully selected by the Beer52 team ensuring the best of Maine craft beer is represented. One of the breweries included in the box includes Baxter Brewing Co. whose founder Luke Livingston was named the first brewer ever to be listed in Forbes 30-under-30 list with Baxter being the most commercially successful young brewery in Maine.

Beer52 is the UK’s largest craft beer discovery club, with more than 60,000 active members, each receiving between eight and ten craft beers a month, along with a snack and a copy of the award-winning Ferment magazine. It was founded in 2013 by celebrated young entrepreneurs James Brown and Fraser Doherty, and is proudly based in Edinburgh.

The Maine Brewers’ Guild is a nonprofit organization dedicated to promoting and protecting the craft beer industry in Maine. Their mission is to keep Maine in the forefront of the craft beer revolution by offering high quality and creative diversity for the customer.

About the Maine Beer Box

The Maine Beer Box is a custom-built, 40ft., refrigerated shipping container with 78 beer taps and a self-contained draft system that was commissioned in 2017 by the Maine Brewers’ Guild. Serving as a symbol of the collaborative spirit of Maine and American craft brewing industry,  the Maine Beer Box is utilized as part of a multi-year project based around a global exchange of beer between brewers from Maine and countries around the world.

Whether it’s weaving textiles or crafting great beer, we believe putting all you’ve got into what you do starts before the sun rises and doesn’t stop until the job’s done. That’s why, in 2010, we opened Baxter Brewing Co. in the iconic Lewiston Bates Mill. From the millwrights that once occupied the mill to the modern-day brewer you’ll meet when you pull up a stool, we all share the common traits of Grit, Determination and Passion.

Founded in 2010, Rising Tide Brewing Company is an independent, family-owned brewery that anchors Portland, Maine’s vibrant East Bayside neighborhood. The brewery is guided by creative flavors, quality, consistency, community, and a love of all things outdoors. Rising Tide has brewed Maine Island Trail Ale (MITA) every summer since 2013, donating a portion of the proceeds each year to the Maine Island Trail Association, a non-profit organization that provides stewardship to Maine’s wild islands.

Foundation Brewing Company joined the world-class brewing community of Portland, Maine in 2014. With a drive to expand our knowledge and hone our skills, brewing challenges us, and inspires us to move in new directions. While well-known for American IPAs, we refuse to limit ourselves, and strive to create a portfolio full of diverse styles and beers, eager to explore the full spectrum of brewing at the highest level.

Geary Brewing Company is a dynamic Portland brewery with an important history in both the craft beer world and the state of Maine. Incorporated in 1983, Geary Brewing is New England’s First Craft Brewery in the post prohibition era and holds federal craft brewing license #13. This innovative brewery started a craft beer movement when it poured its flagship beer, Geary’s Pale Ale, in the winter of 1986 and since then has developed an extensive line of heritage beers brewed in open fermentation.