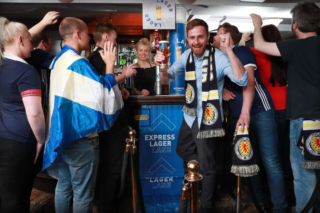 Designed to reduce queuing time at the bar, the lane will open on Saturday 8th June and run throughout the month.

The McEwan’s Lager Lane is the first of a number of activations planned to coincide with the on-trade roll-out of the brand’s lager refresh; which focuses on a contemporary look and feel and stand-out ‘McE’ logo.

“Everyone loves supporting their team, but queuing for a pint during the game? Not so much.

“That’s why we created McEwan’s Lager Lanes to give football supporters more time watching the match with their mates. Freshly poured draught lager and a national side win – now that’s the perfect recipe for a sing song down the local!”

McEwan’s Lager is available in 50L keg alongside branded collateral including font and full POS pack, including glassware, bar runner and beer mats.