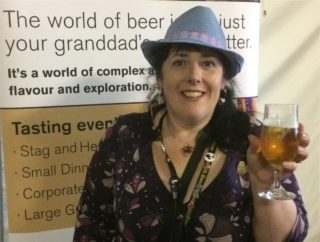 CAMRA are hosting the Great British Beer Festival Winter, taking place in Norwich from 20 to 24 February and featuring World Beers in The Halls central marquee.

World beers have been selected from Australia, Austria, Belgium, Brazil, Denmark, France, Germany, Italy, The Netherlands, Norway, Poland, Spain, UK and the USA and will be showcased in the marquee, accessed via the Cloisters of St Andrew’s Hall.

All beers are note-worthy, but just to select a few to whet the appetite:

There will be a bottled Australian golden ale, Little Creatures, laden with hops with loads of character.

Austria’s Brauerei Schloss will also be represented with its Samichlaus Doppelbock, perhaps the rarest in the world! Samichlaus is brewed on 6th December each year and older vintages become more complex with a creamy warming finish.

There is a limited edition Alvinne beer, available in bottles at the World Beer Bar from the ‘Wild West’ of Belgium.  This beer is aged in French oak barrels (Chateau La Croizillé) from 2011 and contains a wide range of handpicked berries.

There is naturally a large selection of Belgium beers including bottled Trappist beers from Belgium, Netherlands and Italy, together with a classic Belgium Dubbel on draft, with dry fruit flavours and gentle roastiness.

There is a wide selection on draft, such as the Thirstin More from Warpigs brewery of Denmark, a hazy golden beer with an aroma of dry orange fruits, wheat, citrus and flowers.

There is a collaborative brew brought to us by Fuerst Wiacek of Germany together with Zagovor Brewery, ‘German Movies’, a double dry hopped with Citra, Mosaic and Galaxy that they acquired from the Põhjala Brewery of Estonia.

There are also lagers from Germany, Poland and UK on draft.  Also look out for the array of draft UK beers from All Day Brewing, Ampersand, Burnt Mills, Little Earth Project, Nene Valley Brewery and Redwell, alongside a tempting selection of Belgium draft beers.

From the USA, we have on-draft the Gangster Frog IPA, from Hopping Frog brewery, a crisp and satisfying American IPA with a bright, spicy citrus hop character up front and a distinct orange and tropical fruit hop bouquet, adding a welcome complexity.

Making its first ever UK appearance will be the American Citreamcicle from Mantra Artisan Ales. A vanilla and lactose IPA with a tropical bouquet.

Cheryl Cade, who manages the World Beer Bar comments ‘there is a limited selection of each beer, but there is such a wide choice we are sure you will find something of interest.  If you are unsure or can’t find what you’re looking for, please ask our experienced team of volunteers, they will be happy to help you find that special something.’

Cheryl is a Beer Sommelier and hosts beer events throughout the year through her business, The Thirst Consultants.  Cheryl is also hosting the Beer & Fine Dining Experience to be held at the Maids Head Hotel, offering a three-course evening menu pairing with different local beers on Sunday 18 February, 7.30pm. Local brewers will be sponsoring the event as part of the CAMRA Great British Beer Festival Winter. Breweries are: Ampersand Brewery, Allday Brewing, Elmtree, Boudicca, Humpty Dumpty, Beeston and Panther. Tickets are £35 pp and are selling out fast and can be purchased until Sunday 11 February – gbbfw.org.uk/tickets.

To keep track of the draught beers (including draught world beers) on offer during the festival, you can view the online beer list, which is updated as they change:

The World Beer Bar forms an integral part of the Great British Beer Festival Winter, which starts on Tuesday, 20 February, at The Halls, Norwich, opening with a CAMRA members-only preview from 5.30pm.  It is then open to everyone from 12noon until 10.30pm every day until the 24 February.  The Halls, including Blackfriars’ and St Andrew’s medieval friary complex, is also home to the Norwich Beer Festival, which is also organised by the Norwich & Norfolk Branch of CAMRA and which celebrated its 40th anniversary last October.

The festival will feature a range of keg cask and cask ales, from traditional dark ales to light hoppy ales, as well as world beers.  Food is available throughout the day and bands will entertain in St Andrew’s Hall on Thursday, Friday and Saturday (leaving the Cloisters and Blackfriars for those who prefer a quieter surrounding).  Entrance is free to CAMRA members and £4 to non-members (£3 Wednesday) on the door.  There is also a Fringe Festival taking place in Norwich pubs throughout February.  For more information about The Festival and The Fringe visit winter.gbbf.org.uk.

CAMRA, the Campaign for Real Ale, is a not-for-profit consumer group with nearly 185,000 members that has been operating since 1971. Our vision is to have quality real ale and cider and thriving pubs in every community.

Please note that ‘Campaign for Real Ale’ should be referred to as CAMRA, in capitals.