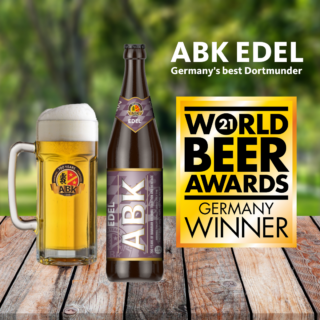 Brewed since 1308 in the Bavarian town of Kaufbeuren, the ABK brewery was acquired by ROKiT Drinks in 2013 and has since become the fastest-growing German beer brand in the UK.

“Given that our beers were not exported more than 20 miles from Kaufbeuren in all of its 700 year history until we acquired this incredibly historic brewery, it’s wonderful to see our award-winning beers available internationally.”

Now on sale in some 2,500 pubs, clubs and restaurants, as well as through major retailers such the Co-op across the UK, the company are rightly proud of the awards which recognise the supreme quality of their beers.

“No wonder ABK Beer is growing so fast in the UK, winning  Best in Country, particularly in Germany, is no mean feat,” added Graham Higgins, CEO.