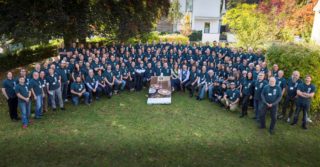 International competitions continue to serve as key platforms to raise awareness for American craft beer abroad and assist EDP member breweries with generating publicity for their brands in overseas markets. As part of its programming, the EDP helps facilitate U.S. brewery participation and performance in select competitions by covering entry fees and consolidated airfreight shipment to judging sites.

Now in its eighth year, the Brussels Beer Challenge is an annual international beer competition that aims to promote the beer industry in a market that is not only a benchmark for beer, but also home to connoisseurs.

This year, 1,800 beers were judged by 100 internationally renowned beer experts over three days. Participating beers are subdivided into categories based on origin, typology, and style, and then tasted.

Congratulations to the EDP members who were awarded with 45 awards in total: 12 gold, 11 silver, 16 bronze, and 6 Certificates of Excellence.

One of the most recognized beer competitions in the world, the European Beer Star Awards, took place for the sixteenth occasion in October 2019 and is committed to the traditional European art of brewing. It recognizes high quality, authentic beers that are genuine and distinctive, and is limited to beer categories that originate in Europe.

In the 2019 competition, there was a record-breaking number of beers entered: 2,483 from 47 countries in 67 categories, of which 195 beers were from the United States.

The competition was judged by 145 international beer experts from 28 different countries. Congratulations to the EDP members who secured 25 medals in total: 6 gold, 10 silver, and 9 bronze. Medals were presented at BrauBeviale in Nuremburg on November 13.

The Brewers Association (BA) is the not-for-profit trade association dedicated to small and independent American brewers, their beers and the community of brewing enthusiasts. The BA represents 5,000-plus U.S. breweries. The BA’s independent craft brewer seal is a widely adopted symbol that differentiates beers by small and independent craft brewers. The BA organizes events including the World Beer Cup®, Great American Beer Festival®, Craft Brewers Conference® & BrewExpo America®, SAVOR™: An American Craft Beer & Food Experience, Homebrew ConTM, National Homebrew Competition and American Craft Beer Week®. The BA publishes The New Brewer® magazine, and Brewers Publications® is the leading publisher of brewing literature in the U.S. Beer lovers are invited to learn more about the dynamic world of craft beer at CraftBeer.com® and about homebrewing via the BA’s American Homebrewers Association® and the free Brew Guru® mobile app. Follow us on Facebook, Twitter and Instagram.