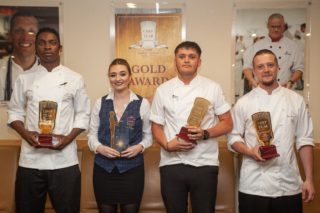 Luke Emmess, Head Chef of The Still & West in Portsmouth, has been named Fuller’s Chef of the Year 2019, winning a four-day placement in British Chef Simon Rogan’s new restaurant in Hong Kong.

The final cook-off took place at Havant & South Downs College in Portsmouth, where finalists were judged on their techniques, flavour, execution and service by an expert judging panel of 12 leading industry individuals – including Michelin Star Chefs – with seven judges for food and five for service.

The eight finalists for Chef of the Year were challenged with designing a menu using pigeon for the starter, smoked cod for the main course and pumpkin for the pudding. They were teamed with a Service Coach, who served their menus to their guests and the judges.

Fuller’s Chef of the Year:

Luke also won Junior Chef of the Year in 2016, spending four days at Darren Velvick’s restaurant The Croft and Jason Atherton’s Social Marina restaurant in Dubai as the prize.

Junior Chef of the Year:

Chefs competing in the Junior and College categories were tasked with creating a main course using smoked cod and a pudding made with pumpkin. Junior Chef of the Year winner Shey Odysanwo won for his pistachio crusted malt and barley smoked cod, served with mushroom consommé, shimenji and shiitake mushrooms, followed by pumpkin macaroon, served with raspberry and pumpkin caramel, lime gel, and white chocolate and whiskey mousse.

College Chef of the Year:

This year Fuller’s opened the competition to full time and part time students attending the seven colleges that it partners with on its apprenticeship programme.

Service Coach of the Year:

Fuller’s Service Coach of the Year recognises excellence in front of house service. Niamh from The Ship Inn in Langstone won for her flawless, professional service, knowledge of ingredients and drink recommendations.

“Chef of the Year celebrates our core values of doing things the right way, being part of the Fuller’s family, celebrating individuality and always asking ‘what’s next?’.

“I’m completely blown away by the talent of this year’s competitors. All the finalists truly exceeded my expectations with the skills, techniques and creativity used with the ingredients given to them, and the front of house service, which is integral to everything we do, has truly raised the bar this year.

“With the introduction of College Chef of the Year, I wanted to inspire and give insight to future talent, showing that they can have a creative career as a chef at Fuller’s. The students displayed the skills, knowledge, passion and self-confidence of experienced chefs. And, as potential head chefs of the future, seeing the young talent coming through inspires me to continue the work we do.

“Congratulations to our Chef of the Year winners for 2019, and to everyone who competed. I’m very proud of everyone who took part, came through, developed and contributed, and I look forward to next year’s competition.”

View a full list of finalists for Fuller’s Chef of the Year 2019: https://www.fullers.co.uk/blog/food-articles/chef-of-the-year-2019

A selection of photos can be downloaded here – https://we.tl/t-U9wi4q1UQJ