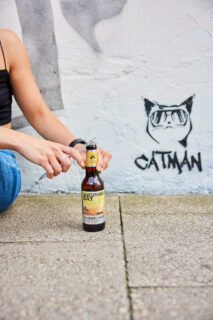 Whitstable Bay – from independent Kent brewer Shepherd Neame – has teamed up with anonymous local street artist, known as ‘Catman’ for its new campaign Inspired by Creativity.

Catman, who grew up and still lives in Whitstable, said: “Having grown up in Kent I am very familiar with Shepherd Neame, and I was really excited at having the opportunity to team up with such a great local family company, particularly on a campaign promoting Whitstable and encouraging people to get creative, which I feel very passionately about. I think it is a fantastic idea to share art in different spaces such as pubs and hotels to make it more accessible and inspire people to enjoy or create art – just as I try to do with my street art.”

Five limited edition Whitstable Bay x Catman glasses are available now, each featuring one of Catman’s exclusive designs and a collector’s mark of authenticity. The exclusive glasses will also be available to win in competitions on Whitstable Bay’s social channels throughout June, July and August along with limited edition branded paddleboards, clothing and stationery items created for the campaign. These will also be available to buy from Shepherd Neame’s brewery shop in Faversham and online shop (shop.shepherdneame.co.uk).

The Inspired by Creativity campaign will also see the launch of a new limited edition High Tide Afternoon Tea featuring beers from the Whitstable Bay collection next month, along with a competition to win an exclusive weekend experience in Whitstable.

Marketing Manager Louise Buet said: “We are really excited about this new campaign which we hope will encourage more people to discover Whitstable’s unique community and culture, while enjoying our award-winning Whitstable Bay beers.”