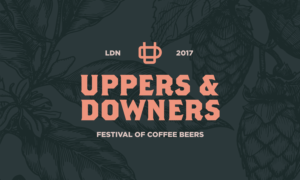 Chicago’s Good Beer Hunting is bringing its popular Uppers & Downers festival of coffee beers to British shores. Taking place at Brew By Numbers in Bermondsey, London, Uppers & Downers will showcase collaborations between fourteen of the UK and Ireland’s finest brewers and roasters. The event, which has been a sell-out success at Chicago’s Thalia Hall for the past three years running, will bring together the worlds of craft beer and third wave coffee like never before.

Uppers & Downers is a collaborative coffee beer series of events created by Good Beer Hunting’s Founder and Director Michael Kiser and World Barista Champion Stephen Morrissey. The goal of Uppers & Downers is to focus on coffee as a specialty brewing and blending ingredient with origin. At this event you’ll experience coffee beers in a range of unexpected styles, extraction methods, and blending techniques that showcase the innovative flavours, aromatics, and textures in the finished beer.

Uppers & Downers London will feature collaboration beers from the following brewers and roasters:

Speaking in anticipation of the event, Good Beer Hunting’s Michael Kiser had the following to say:

“Bringing Uppers & Downers to London is both an incredible outreach and homecoming for us. We’ve had people from all over the world venture to Chicago for the fest, and because of that interest and awareness we’re now able to bring it to them, which creates a platform for local brewers and roasters to showcase their own beer and coffee cultures, and experiment through collaboration. And no place outside the States has been more important to us than the U.K.”

“Our audience there is growing at an incredible pace, consistent with the growth of its craft beer scene, which has become quite ambitious in its own right. But for one of our founders. Stephen Morrissey, it’ll feel like old times – he worked alongside the founders of Square Mile in their earliest days in London. He lived in London when he became the Barista World Champion, at a time when the city’s coffee scene was beginning to explode.  Many of his greatest coffee friends are here. And now he’s moving back! It’ll be a bit of a homecoming celebration as well, and I’m excited about what that means for us with Uppers & Downers in London going forward.”

“By some odd yet lovely coincidence, we’ve ended up planning this the exact same month I move back to London after almost a decade in Chicago, and it’s hard to imagine a better way to reconnect to this city. Uppers & Downers is as much about highlighting two cultures as it’s about highlighting a style of beverage – one night to reacquaint with friends and roasters, and explore the city’s craft beer scene, what more could you want the week after moving.”

Uppers & Downers London will take place at Brew By Numbers, 75 Enid Street, London SE16 3RA. Tickets are £35 each (plus booking fee) and include a pour of each collaboration, a one of kind Uppers & Downers glass and a Good Beer Hunting goodie bag. They can be purchased via Eventbrite here: https://www.eventbrite.com/e/uppers-downers-london-tickets-34830841986